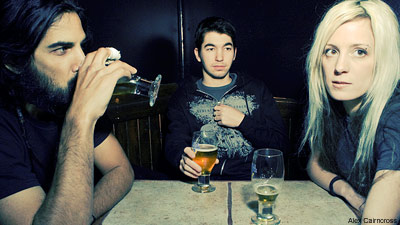 Film and music are complementary mediums -- hence soundtracks, scores and songs inspired by movies. For F--- the Facts, known for their ability to grind your mind with unrelenting, mind-erasing speed and almost perverse brutality, guitarist Topon Das knew that his band's latest album, 'Disgorge, Mexico,' had that visual component. That's why filmmaker David Hall, who was actually in the band for all of a minute, made an accompanying short film whose only sound is the album!

"It was an idea I had before we even started recording 'Disgorge Mexico,'" Das told Noisecreep. "I wanted a visual track for the entire album. We had worked with Dave before, and I knew he was the one to make it happen. He agreed, and here we are. There's no real reason to do anything we do. We just do it because it's the best things we can think of doing with our time."

The film is almost sickening and certainly stomach-turning, as it features the actors playing with lots of bodily fluids that most of us don't like to think about outside of our time in the bathroom. But it may very well attract a bit of a hipster art-loving -- and dare we say pretentious? -- crowd.

While who takes to the film remains to be seen, the process taught the guitarist a series of important things, such as "set deadlines, don't mow your lawn when it's raining and always look both ways before jumping off a bridge."

The trailer and other details are available at the official Web site of 'Disgorge, Mexico.'

Download F--- the Facts Songs
Filed Under: fuck the facts, FuckTheFacts
Categories: Interviews
Comments
Leave A Comment
Back To Top