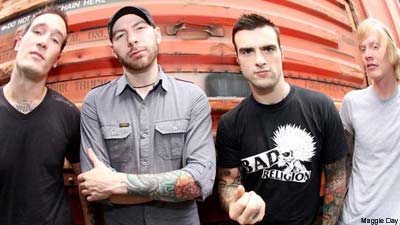 The months leading up to an album release can be some of the busiest time in a band's schedule. Outside of recording sessions and rehearsals, there are video shoots, interviews and countless other things that can drive anyone mad. That's why, when Evergreen Terrace drummer Kyle Mims got into a horrible biking accident over the summer, the band was in panic mode. The Florida veterans had just recorded the album of their career in the shape of 'Almost Home,' so they needed Mims to be ready for all of the work that was ahead.

Now that the album has hit stores, Noisecreep caught up with Evergreen Terrace guitarist Josh James, and he gave us the lowdown on what happened and how they bounced back.

Your drummer Kyle broke his clavicle recently in a bike accident. Talk about great timing!

I know right! We had just finished practicing with our new bass player, and things were sounding really tight. Anyway, I drove down the street, and I see Kyle lying in a pool of blood. [Guitarist Craig Chaney] lives on the same block, and I also see [bassist Chris Andrews] standing over Kyle in disbelief. The guy was covered in blood, and looked like Sissy Spacek in 'Carrie.' I pulled over, and then the ambulance showed up.

Was Kyle racing down the street or something?

That's the craziest part! He was going for a regular ride on a beach cruiser. Somehow the spokes collapsed and it threw him off the bike and he hit the pavement face first. He's lucky to be alive! There was blood everywhere.

It must have been a huge financial burden for him.

It came at the worst possible time, too. He's a waiter and was a month away from getting health insurance. We're talking around $100,000 in medical bills for the guy. It wrecked his world. I have to give him credit though, because he's been very optimistic about the entire thing.

Did his accident hold back the build-up for the new album's release?

He's been a real trooper through the entire thing. We shot the video 'Sending Signals' a bit after the incident, and he demanded to be in it. He worked hard on 'Almost Home,' so he wanted to make sure he didn't miss out on the video and the record release show.