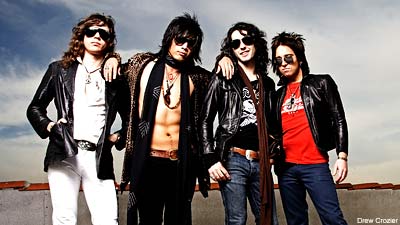 For many people, life is what happens outside of work. For others, work provides a sense of purpose and stability. Endeverafter singer and guitarist Michael Grant falls into the second category. He's in the unique position of choosing to work or do music full-time. Surprisingly, he chooses work -- and it's not all about the money.

"I'm a bartender. I still work at nights," Grant explains to Noisecreep. "I do music in whatever free time that I have. I could do music full-time, but I actually like the concept of working. To connect with people, to stay in touch with the world."

When Endeverafter landed a record deal -- first with Epic and eventually with current label Razor & Tie -- Grant quit work and made music full-time. A fantasy for many, but for Grant, the existence turned aimless and his songwriting suffered.

"I would just literally sit around and do nothing. I would sit around, play guitar, watch TV, walk the streets, get some coffee, go to the beach. It sounds like a great life, and it is ... but I was like, 'What else? What else am I supposed to do now?' I do like having some sort of purpose in my life: a trek. I think it's good to have a job."

That purpose helps Grant stay on a schedule that allows him time to reflect on his life while writing songs for Endeverafter's next album, which is planned for a summer 2010 release. "When I got a job, I got to tear myself away from my own head for a while and concentrate on other tasks. I get lost in my head a lot," he admits.

Grant is the main songwriter for Endeverafter, but this time rhythm guitarist Kristan Mallory and bassist Tommi Andrews are also lending a hand. "We've been passing demos back and forth to each other," Grant says. "[Drummer] Eric Humbert is the only one who doesn't write anything. He always says, 'I'm just a drummer.' He's an amazing drummer. He doesn't like the songwriting aspect. He can play any beat and execute anything you ask him.

"It's funny how we communicate. Kristan and I communicate drum parts that we want for our songs by sounds. We'll mimic with our mouths. We'll be like, 'Play this bah-bah-bum-bum.' And Eric's like, 'Alright.' It's a language all in its own, and it is amazing."

Endeverafter will sail next month aboard ShipRocked, a floating festival featuring other bands like Queensrÿche, Ratt and Tesla.