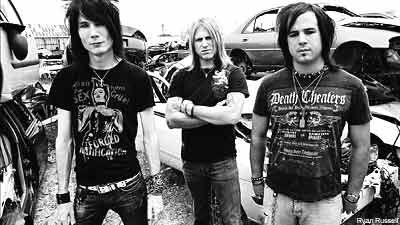 "It's got a lot of new bands and a lot of old-school bands, so it's a total rock boat," says frontman Jacob Lynam.

The five-day cruise leaves from Ft. Lauderdale, Fla. and heads to Jamaica and Grand Cayman from Nov. 15 to Nov. 20. Queensryche, Tesla, RATT and Skid Row perform one scheduled show apiece. The rest of the bands will perform two scheduled shows.

Jacob and his bandmates, bassist Mark Lynam and drummer David Lynam (who all use David's real last name), have some ground rules before their live shows that they will abide by -- even if they are on a cruise where the artists are given free drinks.

"We have a very stern policy of absolutely zero alcohol before we go onstage. I mean none. Not even a sip out of a beer, period. And there's a no exception to that rule, ever, no matter what the show is," says Jacob.

"Some people can play when they're drunk," he says. "We know that we cannot play when we're drunk. The show is absolutely terrible if we're drunk. Can't even make it through a song. It's not fair to the crowd."

So will he still be able to play well if he gets sunburned or gorges at the all-you-can eat restaurants?

"Well, I don't go out in the sun very often, so I don't ever have to worry about that," he laughs. "When we get up onstage, there are certain things that we can't do and it's just all about people spending their hard-earned money to buy a ticket to a show. I feel like you should always give them 110 percent and make them want to come back and see you the next time, so we take what we do very very seriously.

"I actually don't drink, but the guys in my band, the second we say 'Thank you, good night,' and get off the stage, those guys will get annihilated. Work is done."