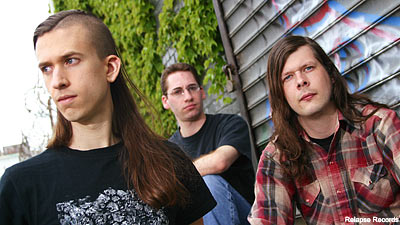 It isn't often that New York's Dysrhythmia gets to tour, as they will this September and October. But when they do, they refuse to leave home without two very special CDs, says guitarist Kevin Hufnagel.

"We're big fan of prank calls," says Hufnagel, who, along with bassist Colin Marston (also a member of death metallers Krallice), is working with Luc Lemay on Gorguts' forthcoming album. "In particular, we're obsessed with this genius who releases albums under the name Longmont Potion Castle."

Hufnagel says when Dysrhythmia's van is in motion, you can bet they're listening to Longmont Potion Castle. They have even turned other bands they've toured with on to the anonymous surrealist prank caller's work.

"He's this mysterious guy who has been putting out prank calls since the '80s," Hufnagel says. "You don't usually get it at first. It's kind of the opposite of most comedy, where you hear a joke and it's hilarious and you hear it over and over, and it's less hilarious, because you already know the joke. It's weird. The more you listen to it, the more absurd you realize it is ... the things he says, and the way people respond to him. We go around quoting him to each other all the time, and we listen to those CDs obsessively."

But they're also fans of another bizarre album, which is essentially a best-of collection of Kiss frontman Paul Stanley's wacky stage banter.

"It's, like, 99 tracks of Paul Stanley, just throughout the years, saying crazy s--- between songs, where he just sounds ridiculous," he says. "Its edited together really brilliantly. You can't listen to it all at once, or you'll lose your mind. Its good in small doses. But it certainly keeps you in a good mood."