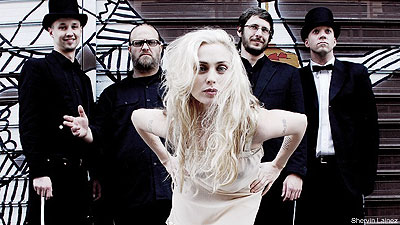 M. Shawn 'Clown' Crahan is best known as one of the founding members of metal juggernauts Slipknot, but the percussionist isn't content unless he's working on several projects at once. In the past few years, he's directed videos, worked on remixes for other artists, started an indie label and released a Rick Rubin-produced album with a band called To My Surprise. Crahan is also an avid photographer, whose stark work is regularly showcased on Noisecreep. As busy as the Slipknot star is, you can count on anything he puts his name on being worth your attention. That brings us to Dirty Little Rabbits.

Crahan's newest passion, Dirty Little Rabbits, is a 180 degree turn from his work in Slipknot. The group features the alluring vocals of Stella Katsoudas, who Crahan met 12 years ago at a Chicago show the singer was playing at the famed Metro club. Clown explains, 'Because of her willingness to share her inner pain with the world, I knew she would be the voice and the face of the music that would eventually become the Dirty Little Rabbits. She is my favorite female singer."


After meeting keyboardist Michael Pfaff and bassist Jeff Karnowski in 2007, Dirty Little Rabbits released an EP that year called 'Breeding.' Last year found the band signing with The End Records, releasing the 'Simon' EP and working on their upcoming debut album. Anyone who has met or read an interview with Crahan already knows how passionate he is about his art, and Dirty Little Rabbits is no exception. 'Music is and always will be God to me, and I enjoy it most when I'm able to share it with others.'

In this Noisecreep exclusive, we are beyond thrilled to be premiering 'Professional Hit,' the first video from Dirty Little Rabbit's self-titled debut album, which hits stores on July 6 (the digital single will be released on May 11).

Directed by Crahan, the video features the band jamming in a warehouse, bathed in strobe lights. But it's Katsoudas who steals your attention. She delivers each lyric with the kind of writhing force that pulls you in from the first line. She gives such a relentless performance that she's lying on the floor at the end of the clip, practically lifeless. So check out the Noisecreep debut of Dirty Little Rabbits' 'Professional Hit' video and see why we think this group will be on the year-end lists come December.