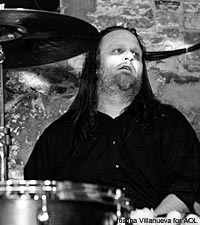 "I called Rick Rubin up and said, 'Look man, I'm miserable. I'm out. I'm done. I'm not having any fun anymore,'" Slipknot percussionist and Dirty Little Rabbits drummer Shawn 'Clown' Crahan told Noisecreep. "And you know what he told me? He said, 'The answer's easy, man. Have fun. Quit worrying about singles and artwork and labels and your manager and videos. Forget all that s---. Play your f---in' music.'"

Crahan had worked with Rubin when he worked on Slipknot's 2004 album 'Vol. 3: The Subliminal Verses,' and the legendary producer had become somewhat of a guru to him. So he followed Rubin's advice and formed Dirty Little Rabbits in 2007 with keyboardist and songwriter Michael Pfaff.

"We met through [Slipknot DJ] Sid Wilson," Crahan said. "Sid called me and said, 'You gotta come down and jam with this guy.' And I said, 'Nah, I'm not even going out of the house.' My wife turns to me and goes, 'You're being a grumpy f---. He's reaching out to you." So I go. Two measures into it I'm like, "What is that guy doing?" He wasn't questioning what I was doing, he was playing along with it to compliment it, which no one had ever done before. I was like, 'This is who I am and this guy is my musical partner.'"

Pfaff introduced him to bassist Jeff Karnowski and Crahan brought in guitarist Ty Fyhrie, who was eventually replaced by Ryan Martin. At first, the group was called Pfaff and Clown and they recorded a 10-song demo, but they needed a vocalist. That's when singer Stella Katsoudas entered the picture. The vocalist had been introduced to Crahan years earlier by Slipknot's old manager Sophia John when she was an industrial pop artist performing under the name Sister Soleil.

"When I saw her back then, I fell in love," recalled Crahan. "I thought, 'I'm going to make music with her. I don't know why. But I'm gonna remember her. I'm connected to her. It's meant to be.' So she went on her way and I went mine. We did our thing. Then I met my musical partner, we wrote 15 songs and I said, 'I got an idea.' Her pain and her love and her passion was the development I needed in my music. 'And really, the rest is history."

Dirty Little Rabbits released the six-song EP 'Simon' in January 2009. Their self-titled full-length comes out July 6 and includes the five tracks streaming on the band's MySpace, 'Professional Hit,' 'I Love You,' 'Hello,' 'You Say' and 'Simon.'

While the music is pained and jarring, and some of it is powered by blaring guitars, it's equally fueled by new wavey keyboards, pop vocals and abrupt rhythm shifts reminiscent of Frank Zappa or Mr. Bungle.