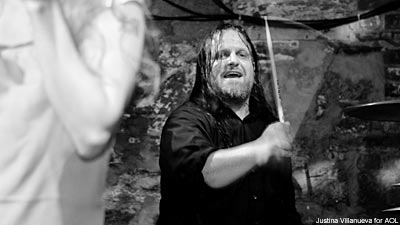 While they will continue to mourn the tragic death of their bassist Paul Gray for some time to come, the other members of Slipknot are getting ready to return to work with their other bands. Vocalist Corey Taylor and guitarist Jim Root will tour with Stone Sour this summer to support their third album 'Audio Secrecy,' drummer Joey Jordison is playing with Rob Zombie and will soon promote the next Murderdolls album 'Women and Children Last,' and percussionist Shawn Crahan is getting ready for the debut release by his band Dirty Little Rabbits, a group he feels particularly attached to.

The band, which Crahan co-founded with Michael Pfaff, plays an offbeat, experimental mélange of alt-rock, new wave, punk and hard rock. As much as he loves the clatter and pound of Slipknot, this is the music he grew up with.

"I'm an alternative guy I like the Butthole Surfers, Jane's Addiction, early Smashing Pumpkins," he said. "When I was doing 'Vol. 3 [The Subliminal Verses]' with Slipknot, I went up to [drummer] Joey [Jordison] and I was like, 'Come up to my room and listen to what I'm writing.' I played him this song called 'Better,' and Joey's like, 'Not a chance in hell that's even gonna get two seconds of consideration for the album.'

"I was just out of my mind, going, 'Are you f---in' crazy?' So, [producer Rick Rubin] comes up, laying in my bed [and listens to the song], rubbing his beard. He wakes up out of a spiritual trance and goes, 'Have you ever listened to the Swans?' And I went, 'No, but I don't like your tone.' I went right down to Tower Records to a pierced mother f---er who looked like a noise freak. 'You know who the Swans are? Tell me the two best records to check out.' Boom, boom. I put them on and I got what Rick was saying. Alternative, yes. That's my world."

In addition to enjoying the alternative direction of Dirty Little Rabbits, Crahan is having a blast playing drums instead of being one of two percussionists who augment the sound of an already explosive drummer.

"Most people don't know, but if I allow you to watch me play drums, you're seeing me at my best," he said. "15 years ago I was like, 'I want to play the drums. This is what I want to do.' But then no, I'll be the great big enabler. I'll utilize my vision with my partner [the late Slipknot bassist] Paul Gray, who was like, 'Man, we're going down this journey. What do you think?' I was like, 'I don't know? I like what you've got going on with it. I can get behind it. It makes me want to f---ing just snap necks, and I like that."

He paused to re-track his thoughts, then continued. "But I was meant to play drums. My parents might as well have bought me the drum set I use now. When I play it, I celebrate them giving me life. They're with me. They're like, 'Yeah, that's the son I know. He was good as a Clown -- going up and down with the baseball bat and hitting things and saying, 'F--- you!!' But that's the Shawn that we know.'"