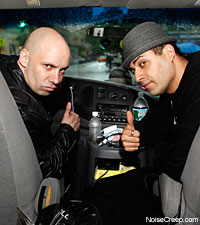 Death By Stereo have been hoofing it in the underground hardcore and punk rock scene for years. And after a multi-year, several-album stint with Epitaph, the band has found itself with a new label home after linking up with System of a Down's Serj Tankian and his Serjical Strike label. The southern California DIY mainstays, which have been rocking their faces off since the mid-'90s, hooked up with the iconic singer through that classic six degrees of separation scenario -- but with a twist.

"I sang a song on the last Buckethead record, which Serj produced and put out," vocalist Efrem Schulz explained to Noisecreep. "I met him through doing that." But guitarist Dan Palmer interjected, "My landlord, actually, had something to do with it. George is my landlord, and he is also the manager of Serjical Strike. And he'd talk about Death by Stereo to Serj and would always give him new Death by Stereo material. We've been intertwined for a while now."

DBS put out a limited-edition live record, recorded in October 2003 at the Chain Reaction in Anaheim, that was initially included for free in the now-defunct magazine Law of Inertia. The band then pressed a limited, 2000-piece edition of that same show on CD, dubbed 'Dead Alive.' Their Serjical Strike debut, 'Death is My Only Friend,' was unleashed July 7.

Being So-Cal lifers, Schulz and Palmer ruminated on their favorite bars in the Los Angeles and Orange County areas, too. "JT's Beach Club in Whittier is one of my favorites," Palmer said. "It's like 20 miles from the beach, but it's still called the Beach Club. We also like the Slidebar in Fullerton, which is owned by the members of that band Lit."

"That's our rock 'n' roll bar," Schulz said. "You can't catch syphilis from a table there, like you can on our tour bus!" Now that's a ringing endorsement for the Slidebar.

Filed Under: buckethead, death by stereo, DeathByStereo, lit, system of a down, SystemOfADown
Categories: Interviews
Comments
Leave A Comment
Back To Top