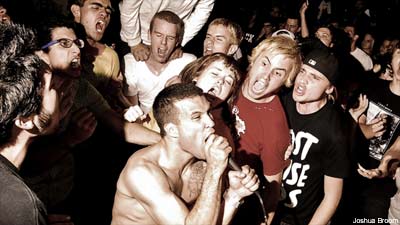 Justin Smith of Dangers, Graf Orlock, Ghosttlimb and owner/operator of Vitriol Records, is building his own independent multi-media empire in the little-discussed Los Angeles hardcore scene.

"The label is just an extension of the bands, I suppose, and a natural step in trying to assert control over everything we are doing," Smith told Noisecreep. "Timewise, it works well because a few of us live together and the core members of each band are at least within driving distance, so it just is a matter of time and scheduling. The label morphed from the logistical things necessitated by being a DIY band into a more overarching umbrella for all of the bands we are involved with. It made sense to consolidate and work in a cooperative, more organized way with all of our friends, to some greater, albeit speculative, future."

Vitriol isn't only releasing music. The company is also releasing books. Smith said, "It was always my aim to try to actually put together music and literary stuff and now we are able to do it. The first book is fiction. I have always liked writing and have kept it going as much as possible over time. The second release is going to be an anthology of different writers we're involved with, on themes like history, radical action, politics, language; in hopes of getting some ideas out there as well as music, ideas that predicate a lot of choices and relationships we have been involved with for years.

"So it would be nice to finally offer something literary along with insanely pissed-off hardcore, without coming off as condescending morons." Vitriol will be releasing a novel by Decibel editor Andrew Bonazelli as well.

Smith releases music by his own bands, as well friends' bands, like Robotosaurus, Drowning With Our Anchors, Owen Hart and Birds in Row. "If we don't go broke, this will continue to happen. It seemed like the right time to get everyone together to do something cooperatively productive and not get screwed by some meglomaniacal, super-prick company interested in percentages and projected sales.

"It is all possible on a smaller level of participation and self-management," Smith said. "I think that the intrinsic value of doing things on a smaller, or rather, more in-touch level, is the way to go. When it comes to participation, it is also an aim to make it as involved and egalitarian as possible. I think it is also having the right aims: to not screw anyone over, to make things as legit and affordable as possible, and to do whatever you want -- within reason -- before the whole thing implodes."

Indie bands with a DIY ethos, are you picking up what Smith is putting down?

In other Dangers' news, the band will be releasing 'Messy, Isn't It?,' the band's second full-length, on Feb. 2.