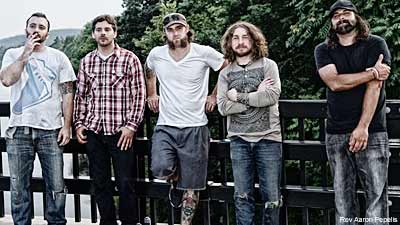 This fall, when The_Network goes out on the road with Australian outfit Robotosaurus, guitarist Pete Marr will be thinking about his recent trip across Australia in search of the perfect wave. You see, Marr is a surfer. In fact, last weekend when Hurricane Bill pummeled the Northeast coast, dude was out there in the ocean -- off the coast of Maine, surfing 20-footers.

When The_Network toured a few months back with Robotosaurus on their home turf, the temptation of the Australian surf was too much for Marr to ignore. He ended up staying behind after the tour as the rest of the band headed for home, and spent two weeks bouncing around the country with his board, a backpack and bus passes.

"I remember at one point it him me ... 'Holy f---, I'm in Australia by myself right now, and this is f---ing awesome!'" he tells Noisecreep. But the whole trip wasn't spent in barrels. Some of it was spent frolicking with sheilas. "I had my fair share," he gushes.

So, if you live near a coastline, chances are The_Network will be playing your town soon. Marr does all of the band's booking, after all.

"There's a reason why we've gone to places that are islands," he says. "We went to Puerto Rico. I went surfing."

The_Network's forthcoming album, 'Bishop Kent Manning,' was produced by Converge's Kurt Ballou. And while that has nothing to do with surfing, it's still awesome. Marr says it was nerve-racking working with Ballou at first, but that things loosened up over time.

"That band Trap Them was down there last summer, and we're friends with those guys. So we went down and hung out, and we were introduced to Kurt officially, because we had played a few shows with his band a few times," Marr says. "It's different when you get out of that show element, it's his home, it's his studio. Man, I don't wanna drop names. We've been out on the road, and people will ask us, 'So, you're like close buddies with Converge and s---, right?,' and it's like 'No, we're friendly to them and they're friendly back, but that doesn't mean we're friends.' I get scared sometimes ... you just don't wanna be that dick that name drops."