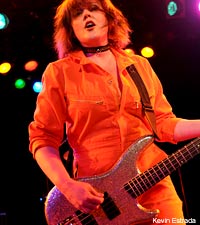 Daisy Rock Guitars founder Tish Ciravolo has the kind of voice that sounds like she's smiling. Her company's mission is to get girls to pick up guitars. "We want to have a girl guitar revolution," Ciravolo -- a bass player who has a metal background, having played in Lypstyck in Los Angeles in the late '80s -- told Noisecreep.

"We aim to be all things for all girl guitar players. Metal is important to us, because girls play metal, and I appreciate it from my background. Even though Daisy Rock is a cute, flowery name, it doesn't mean we aren't into heavy music."

According to Ciravolo, a girl guitar "has a slimmer neck profile and is lighter in weight." The Xtreme is a metal-friendly guitar. "It's black, and it's shiny and has Chevron inlays on it. It has kick-ass pickups, which make it bite more than a typical electric guitar," said Ciravolo, who admits that her band had a billboard on the side of the Roxy and played a 'Battle of the B----es' for a local radio station back in their heyday.

Daisy Rock Guitars exists to fill a need, something Ciravolo experienced firsthand from her playing days. "Other girl musicians and I would walk into local stores and have the guys ask, 'What band is your boyfriend in?'" Ciravolo said. "One day, my daughter drew a picture of a daisy and I thought, 'Let's make girl guitars!' Then there will be guitars on the wall for girls in music stores. We want female musicians to feel there is a community for them."

The guitars also look pretty without sacrificing punch. "We are the queen of pink sparkle," admitted Ciravolo, who is married to the president of Schecter Guitars. Of course, if you make a guitar just for girls, boys are going to want to play it. The Cure's Robert Smith and Jimmy Page are fans, with Page providing Daisy Rocks for his daughters. Eyes Set to Kill are endorsed by Daisy Rock, too.

Daisy Rock's acoustic axes are also functional and practical -- as they consider, ahem, the twins. "When a girl sits down cross-legged for the first time to play acoustically, the guitar is huge, smashes your breasts and it's not comfortable," Ciravoloa said.

"Our acoustic guitars have the 'boob scoop,' so it doesn't smash girls in the wrong places. That first time you play is hard: you have to get over the hump of doing it without having your boobs smashed. We want to make it a pleasant experience."

Daisy Rocks are available at retailers like Guitar Center, starting at $99 and running up to $349.00. The company also makes custom pieces, as well.