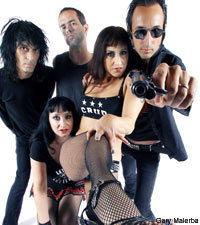 Vinnie Dombroski, lead singer of the Detroit electro-rock band Crud, said having his act's song 'Devil at the Wheel' in trailers for the forthcoming movie 'Sherlock Holmes' is "bizarre. It's a gutsy move," Dombroski told Noisecreep. "I think they just liked the song. I don't know what exactly resonated with them in regard to the tune, but apparently they liked what they heard."

"They offer music to people that are making films for the purpose of trailers," said Dombroski, who doubles as lead singer of Sponge. "Somehow our stuff got circulated to the people at Warner Bros. These days it comes down to whatever people really like. If they really like a song, and if it really fits their purpose, they're going to choose that song. It's a cool thing.

"In the old days, people went and did a campaign to promote a song at radio. There's a lot of money involved in that. It really doesn't have a lot to do with what a programmer likes personally. It really has to do with what's being promoted. In this case, I think it just boils down to what really turns people on. They're just willing to go, 'Well this works for our purpose, too.'"

The 10-year-old band, which will host Cruddy Christmas at The Ritz in Warren, Mich., on Dec. 23, calls the song 'Devil at the Wheel' a "murder ballad."

"It's not quite a ballad," Dombroski said with a laugh. "I call it a 'murder ballad.' You always need a good one -- jealous rage fuels murder. It's strange. I think the song really fits the TV/film medium so well. There are a lot of visual-type things that conjure up when you hear that kind of song. It just seems to work. Maybe it's rock 'n' roll. Rock music like that hasn't been embraced by radio in quite some time. It's not the screaming type of metal of today; it's pure guitar-driven rock. Maybe it's refreshing in some weird way."