It's no secret that for the past few years, Sweden has become the epicenter of modern sleaze and hard rock. With groups like Crazy Lixx and H.E.A.T. releasing some of the most exciting and vibrant Sunset Strip-ready tuneage you've heard since 1989, many fans have focused their attention on the Scandinavian country which is roughly the same size as California.

Leading the Swedish hard rock invasion is Stockholm's own Crashdiet. The group's latest album, The Savage Playground, recently hit stores and debuted at the #2 spot of the Swedish album charts. Crashdiet overcame tragedy early in their career when original lead singer Dave Lepard committed suicide in 2006, but now lead by vocalist Simon Cruz, the group sounds ready for a U.S. invasion.

Noisecreep has joined forces with Crashdiet to bring you the exclusive premiere of their new video, "California," a track off of The Savage Playground. "The video for 'California' describes memories of one of our visits in L.A. It chronicles a typical day on tour...let your imagination do the rest," Cruz tells Noisecreep about the clip.

Get that Aqua Net ready and crank this thing!

Next month, Crashdiet will take on North America with a headlining tour kicking off on March 15 at Hooligans in Albuquerque, N.M. If you love bands like L.A. Guns and Vain as much as Noisecreep does, you'll hit up one of the shows listed below! 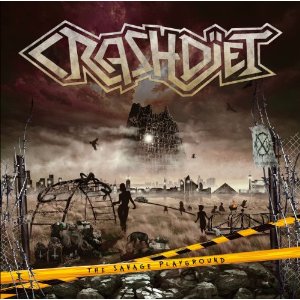 Crashdiet's fourth studio album, The Savage Playground, is out now via Frontiers Records on iTunes and Amazon.

6 Toronto, ON The Mod Club Theatre