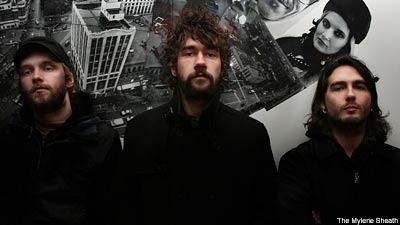 It's that time of year again. It's time to start thinking about what records were the best this year. Recently, we spoke with Constants guitarist/vocalist Will Benoit about his list for the year. He had just begun his but he could name the king of the mountain of releases this year without a second guess. "Mastodon, 'Crack the Skye' is definetely number one," he laughed.

Generally, end-of-the-year lists are riddled with albums that came out closer to end of summer that earlier in the year, but a monumental record lasts countless plays throughout the year. The March-released 'Crack the Skye' is such a record for Benoit. 'It was one of those I burnt myself out on real quick," he said. "I listened to it a lot for the first month or so and then I put it away for a while. Then I busted it out and thought to myself, 'There is no way this is as good as I thought it was.' And it absolutely is," Benoit paused, almost stunned. "It's unbelievable. I have no idea how they did it."

Sadly, even though Benoit admires and enjoys the album so much, he still missed them on the tour when Mastodon played the album start to finish. "I'm bummed out I didn't get to see them because we were on tour. I really want to see them pull it off live," he said.

One other record is getting a high mark is the Jesu release, sans electronic drums and programming, 'Opiate Sun'. With Jesu mastermind Justin Broadrick slated to produce the upcoming Constants album Benoit felt he should almost omit it from his list, but it can't be ignored. "I told Justin straight up, 'This is the best thing you've done in years. Those songs are so good.'"