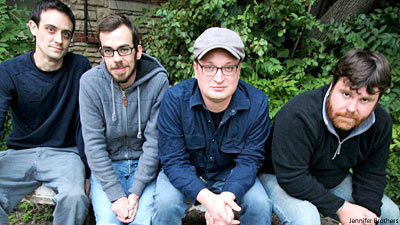 1997 was the year Coalesce vocalist Sean Ingram says the incident that falls under the category of 'scary crazy' happened. "During our set a fight broke out between some squat punks and some straightedge kids and we just kept playing through the whole thing. It was just a really violent show," guitarist Jess Steineger recalled in a recent interview with fan-asked questions, when discussing that show at Stalag 13 in Philadelphia.

The venue, a hole of decay, was famous for its anything-can-happen atmosphere when it was open. "I remember bleeding at this show more than any other; my guitar smelled like a corpse the next day in Long Island when I opened the case."

When anything can happen, that means anything can be brought -- even a dog -- and that's how the fight began. But the Kansas foursome had no clue what was happening while they played. "It was the fact that someone brought a pit bull and it bit someone, so the dude who got bit stabbed the dog in the middle of the show with a knife. I think it was on the staircase, there was blood everywhere," Ingram said. "Every once in a while someone will tell me that the dude who owns that dog wants to kill me if he ever sees me again because we didn't stop playing or something. Like I had a clue what was going on?"

In the 15 years Coalesce have played, their technically-infused hardcore blood has always ended up making an appearance. Just like an another incident from around the same time at The Wilkes Barre Fest in Pennsylvania. Then-drummer James Dewees' kit got dropped on a girl, injuring her.

And though Ingram says the event and set themselves weren't big deals, it's the show that really defined the band as one of unimaginable chaos live -- and led to a member quitting. "Everyone totally overreacted to our set, it wasn't even that nuts. But with the lack of twitter and the internet to disperse info immediately, it kinda stewed and grew bigger than it was until it hit the print zines and became epic," Ingram said. "It was just one of those personal 'what the hell just happened' moments for me."