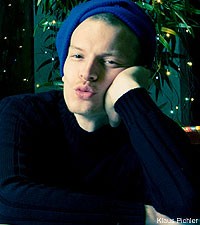 New York City's Child Abuse make some really weird free-jazz-inspired grindcore. Luke Calzonetti is responsible for one third of the sounds his band makes. Lately the keyboardist and vocalist finds himself working out to death metal titans Suffocation and addicted to Twitter.

"I'm a huge 'Pierced From Within' fan (who isn't!), but basically any musical output from Mike Smith and Terrance Hobbs is totally inspiring stuff. I was just listening to Origin's 'Antithesis' record. Also another mind-boggling record," Calzonetti told Noisecreep.

He also enjoyed a set from MoHa! when the band was in Berlin. The trio spent most of February touring Europe, where Calzonetti says the food and hospitality were incomparable to the quality of band treatment they get here in the States. It was also the tour where bassist Tim Dahl told Noisecreep, "I think the band got better, and I think Luke really came into his own as a frontman."

For Calzonetti, adjusting back to life in New York was a little difficult after the tour, however. "Tour is a drag generally, but you get into the rhythm of it. You have one thing to do every day, and that's that. You get home, you got rent to pay, things to do. Normal tedious s---. It can get depressing!" Calzonetti said.

Oh, and did you know that the musician used to model for money? "It was a wild experience, but I could never go back to it," Calzonetti said.

"I did my first job in [San Francisco] for a Diesel editorial. From there, I went to Paris, Milan and Tokyo and worked for companies such as Christian Dior, Burberry, Fendi, Marc Jacobs, Anne Demeulemeester, Kenzo, Rick Owens, etc. I worked with some amazing photographers and met some amazing people, but generally to work in the fashion industry as a model is pretty disheartening and pretty boring!"