Capture the Crown is an Australian metalcore band originally from Sydney. Their debut album, 'Til Death, was released last year by the folks at Sumerian Records to rave reviews after a series of popular singles including "You Call That a Knife, This is a Knife." The band is currently on its biggest tour yet, storming across America with Of Mice & Men, Woe, Is Me, Texas in July, and Volumes.

Recently, Noisecreep spoke with Capture the Crown guitarist Jye Menzies about the band's recent move to the United States, and what it's like to be touring with some of their favorite bands.

Do you find there to be a big difference between touring in America and Australia?

The thing is, we didn't really tour all that much in Australia. We played locally with a lot of small bands but it's nowhere near what it's like here in America. On this tour, every night has been sold out. It's been just incredible. We never experienced anything like this in Australia.

How of the other bands on the tour been treating you?

Incredibly well. We toured with Woe, Is Me before on one of their headlining tours. They're just great guys. We also just met Texas in July who were also very nice. Today we had lunch with Of Mice & Men for the first time and that was incredible. When we heard that Austin Carlisle was happy that we're on this tour, it blew our minds. To imagine a guy like that being happy that we are along for the ride is really something for us. Of Mice & Men is a band that we totally respect and it's really an honor to be touring with them right now. It seems every band we meet in America wants to make us feel welcome and it's hard to describe how much that means to our band.

What did you listen to growing up in Australia?

I loved Blink-182, Guns N' Roses, AC/DC and all kinds of other rock 'n' roll stuff. You know, the basics. I think the first heavy band that I got into was Slipknot. Soon after that I got into Parkway Drive.

Did you have a chance to see many bands growing up in Australia?

Not too many. I must've seen Parkway Drive about five or six times. And I also saw Angels and Airwaves which was very memorable.

How of the audiences here in America been receiving your band?

It's been crazy. The last tour we did here, which was the first one in America, was very good. But this one has just been crazy. We'll see 900 people each night and it seems like all of them are singing the words and they have been jumping around like crazy. It's very hard for us to describe what it means when we see that but it's an amazing feeling. There are other things that make this tour special too. For instance, the last time we were here and visited Los Angeles we ate at a restaurant across the street from the House of Blues. I looked over there and thought, it would be my dream to play there. And now we will be there in a few days playing to a sold-out house. It's just hard to imagine.

Your band recently moved over here to the States. What's that been like?

We love it. Our drummer is American and his family has been very generous in letting us move in with them until we really get things going. They live in Pennsylvania and so that's our base.

It must get pretty crazy in that house. Sounds like it might be a good basis for a reality TV show.

It does get pretty nuts at times. Were really very thankful for their generosity. To let all of us stay there when we can get pretty crazy and stay out late and party and get a little nuts sometimes is something we totally appreciate. And yeah, I think if they were filming it would make a pretty good TV show.

What do your families back in Australia think of all of this? They must really miss you guys and at the same time feel good for success you're starting to have.

Yes, that's just how it is. Of course we're still their babies but our families look at all of this as a very positive thing. They know that we are busting our asses doing what we love 100%. And of course without them none of this would be possible. Our guitar player Blake was just telling me that his dad, who is a bus driver in Australia, wants to come over here and try for us [laughs]. 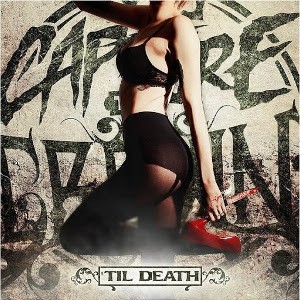 Capture the Crown's 'Til Death is available now via Sumerian Records on iTunes and Amazon.

Tour dates with Of Mice & Men, Woe, Is Me, Texas In July and Volumes:

Filed Under: capture the crown, CaptureTheCrown
Categories: Interviews, News
Comments
Leave A Comment
Back To Top