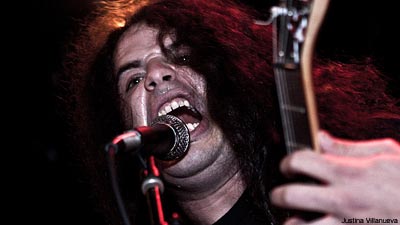 It's pretty rare to watch a band live and not have any of its members say anything to the crowd. Sure, lyrics are a form of verbal communication, but usually a band will thank the fans or announce their name. However, with monikers like He Who Crushes Teeth (drums) and He Who Gnashes Teeth (vocals, guitar), it shouldn't be a surprise that Bone Awl kept a cold distance from the audience when they played their second New York City show (they played with Akitsa a couple months ago) this year.

Sandwiched in between Queens' Agrath and France's Celestia as part of a very special Show No Mercy showcase, Bone Awl members did not give Public Assembly any banter. That did not, however, hold people back from moshing.

The northern Californians played what seemed like a short set with a lot of short songs. But really -- because Bone Awl make black metal for people with big crust punk hearts -- we all just wanted more.

Formed in 2002, the band has kept true to its very DIY virtues. One of the members distributes all the band's releases -- which are all analog, either on tape or on vinyl -- through his label Klaxon Records. And, if that doesn't paint enough of a picture for you, check out the band's statement about MySpace pages below.

"Any MySpace page that has Bone Awl's music on it is fraudulent. There has been confusion with people messaging and looking at the page assuming that it was created by Bone Awl. This is, of course, not the case, it is run by someone who isn't busy enough being themselves. Please understand that Bone Awl would never promote itself in a such a way."