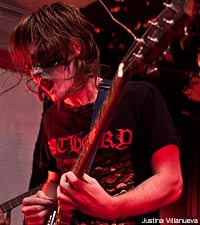 "Go home!" an impatient Mount Eerie fan chanted during Liturgy's set. From where that costumed fellow stood, you couldn't even see Liturgy, because they were covered people headbanging to the fierce tunes of 'Renihilation.'

Despite Liturgy playing the best set I've seen from them yet, the real excitement of the night soared away after a vicious set from Malkuth, which contains members of the N.Y.C. experimental outfit No Neck Blues Band. For the few regular metal show goers in the back, it was the first time seeing the band perform in front of more than 15-20 people at a time.

But, the packed up and sweaty Market Hotel didn't stop the vicious Malkuth from giving me goosebumps. While New York has become a mecca for new black metal -- Negative Plane, Black Anvil, Villains, Agrath and a page full more -- Malkuth remains the most interesting one to watch.

Liturgy will play with Shrinebuilder and Rwake on Nov 15. at Le Poison Rouge and Liturgy and Malkuth will play with Krallice and Orphan on Nov. 13 at Union Pool.