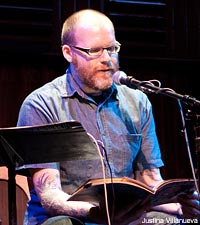 Joe's Pub in New York, N.Y. was occupied with its regular seated dinner crowd Wednesday evening. It was a night for those interested in literature and culture. An indie band named Buke and Gass performed on their handmade instruments before several authors shared their work. Although the program included a Pitchfork writer, the audience was not actually prepared to have Bone Awl vibrations permeating throughout their gourmet soup.

The second writer, Brandon Stosuy, has complied a series of articles and essays that will make up the first book on the history of American black metal. "I sort of need to stop adding to it, but it's hard to stop adding when I get such good material from the musicians." Stosuy hopes that after more interviews he can settle down and begin working with a publisher.

With the primary subject being American black metal and its contrasts with European black metal, he began his reading with the introductory difference between death metal and black metal. You know, "low, deep, guttural growling vs. black metal's vocalists. Usually higher, wispy, wraith-like and screeched." 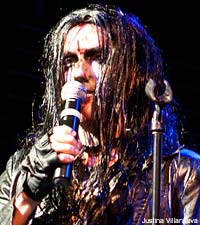 Dressed in Watain-inspired face paint, Matt Luem joined Stosuy on the intimate stage for the second half of the reading. With character and conviction, he performed excerpts from Stosuy's interviews, which include the likes of Jef Whitehead of Leviathan, Lev Weinstein of Krallice, Black Judd of Nachtmystium and many more.

"United States black metal. What is not to like about it?" read Luem. "At least its not s---core. Forest folk. Black metal from the U.S.A. Sure. It works great. We like it filthy. We don't need perfection. We don't need big productions. We're doing what Europeans stopped doing ten years ago which is making black metal without following the standards. All the elements of European metal, but then perfected and refined throughout the years are now subject to an American mixture of reverence and contempt."

Stosuy writes for Stereogum and Pitchfork. He also puts together the monthly metal 'Show No Mercy' showcase at Public Assembly in Brooklyn, N.Y.