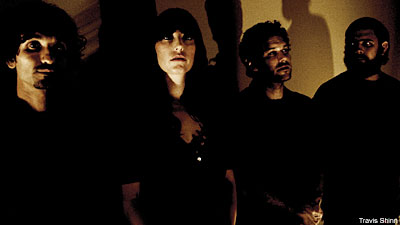 Don't let their name mislead you. Black Math Horseman aren't a black metal band nor are they mathrock, and there isn't really anything 'galloping' or equestrian about their sound. The songs on their Tee Pee Records debut, 'Wyllt,' are dark, distant and dynamic, nestling comfortably into a place between the frigid, precise textures of recent Isis and the warm fuzz of psych and stoner rock with the apocalyptic overtones of Godspeed You! Black Emperor. Not an easy task to accomplish.

"We didn't set out to achieve any one particular sound, we hoped to create our own," bassist/vocalist Sera Timms tells Noisecreep. "We're definitely influenced by, and fans of bands like Godspeed (You! Black Emperor), but never set out to be classified in any particular genre of music. We try our best to leave our influences behind when we're writing."

So, what's the story behind a name as confounding as 'Black Math Horseman' and, for that matter, 'Wyllt'? "The music is a soundtrack to a symbolic story that involves a few different characters, inspired by mythology and history among other things," explains Timms. "One of the characters in the story is Black Math Horseman -- he has the power to hypnotize people with the odd cadence of his horse's gallop.

"The original name of our band was actually Wyllt," Timms continues. "Wyllt is another character in the story, who was influenced by the Welsh version of Merlin: Myrddin Wyllt. In the story of Myrddin Wyllt, there is a heavy theme of being out of balance with a modern society that has become disconnected from nature, working against it instead of in harmony with it. This is exactly what's happening in our modern world, and so history repeats itself again."

Black Math Horseman are very conscious of the world around them. Their music is a sort of modern mythology, a dark and forlorn musical landscape anchored by guitarists Bryan Tulao and Ian Barry's sorrowful melodies and occasionally heavy riffing and drummer Sasha Popovic's subtle, tom-heavy percussion. Over this floats Timms' hypnotic, soaring, reverb-drenched vocal lines.

"We're very much influenced by the state of the world today and the vast, gigantic mistakes that are being made by our own empire in the name of innovation, which have brought us to a near apocalyptic world with the threat of total destruction looming over our heads at every moment," Timms says. "This state of the world makes us look to the past - to history and mythology to try and figure out how we got to this point. The story is in part a symbolic landscape of conscious evolution. ['Wyllt'] explores early human origins, and the repressing governing bodies that seek to control the masses, and the apex is the ultimate struggle to separate ones self from these bounds. Observation leads to realization, to anger, and then to freedom."