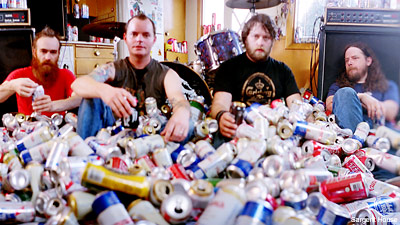 KICKING TIRES AND LIGHTING FIRES: Down and dirty riff rockers Red Fang are currently kicking ass and taking names out on the road. The tour is already in progress; but catch them on their remaining dates, including a trio of SXSW appearances. And if you're lonely and in dire need of a nice slumber party, Red Fang might be able to help out: "check [our tour dates] to find out if you could be the next winner of 'Fang My House.' It's a thing that's sorta like 'Pimp My Ride' but instead we sleep on your floor and drink all your beer. It's pretty awesome - for us."

REUNITED AND STUDIO BOUND: After Eugene, Oregon doom titans YOB disbanded in 2006, founding vocalist/guitarist Mike Scheidt went on to form Middian. Middian released one record, 'Age Eterntal,' via Metal Blade in 2007 before being dragged into a frivolous lawsuit by little-known Milwaukee-based band Midian. Metal Blade promptly dropped the band, who reportedly were restricted from selling their merch and records and forced to change their name.

Last year, Middian finally threw in the towel. Bad news for doom fans, to be sure, but it came with a silver lining: on August 27, 2008, YOB officially announced their reunion. The band will be hitting the studio later this month with veteran knob twiddler Sanford Parker (Nachtmystium, Pelican, Samothrace). In true YOB style, the still-untitled album will clock in near 60 epic minutes with only five tracks. Look for it to be released later in the year via Profound Lore.

BAND TO WATCH: LA's Black Math Horseman are kinda like Black Mountain-- 'black' in the name, epic psychedelic stylings, a song called "Tyrant(s)," female vocals, etc. The difference is that the former, while lesser known, display some serious moments of heaviness among the psychedelia. Case in point, "Deerslayer." The band, who recently signed to Tee Pee Records, are scheduled to play four, count 'em, four SXSW shows / parties with the likes of Skeletonwitch, Kylesa, The Warlocks, Annihilation Time, and Tweak Bird, among others. Their debut full length, 'Wyllt,' which was recorded and produced by Scott Reeder (ex-Kyuss), will be released on April 21.