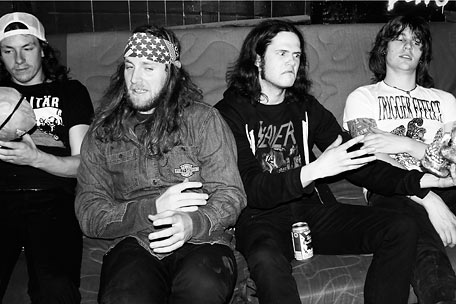 Barn Burner have been called everything from stoner rock worshippers to trad-metal flag bearers. However, one thing everyone agrees on is that the band deals out some of the tastiest amplifier abuse in the hard rock world today. Their twin-guitar melodies alone will bring a tear to the eyes of Thin Lizzy and Blue Öyster Cult devotees. The Canadian quartet plays the kind of riff-rock that skaters, heshers, and metalheads can all agree on.

'Bangers: II: Scum of the Earth,' Barn Burner's second full-length record, hits stores this week and AOL Music is streaming it in its entirety starting today. Produced by Adrian Popvich (The Dears, Priestess), the 10-song collection finds the Canadians upping the ante with even more air-guitar worthy moments and a stronger focus on hooks.

"I've been playing in bands for a long time and done everything from punk and extreme metal to a prog-rock type of thing. When I started Barn Burner it was kind of like me settling down and trying not to do too much within a band or song," said Barn Burner guitarist-vocalist Kevin Keegan during a chat with Noisecreep last week.

"The intention was to get together with the rest of the guys in the group and trying to write music that wasn't going to be categorically one thing or the other," he said. "I know a lot of people have called us stoner metal, but we just play what we want to hear. We've never tried to be any kind of specific genre."

When Noisecreep asked about the artists that have inspired Barn Burner's brand of guitar worship, Keegan was quick to give praise to some of his heroes. "Thin Lizzy and Iron Maiden are definitely were artists we all mutually love and respect," he said. "When I started writing for Barn Burner, that's the kind of style that influenced it. For this band, it's always been about stuff that was riff-oriented and groove-based. But it's always been a huge mish-mash of groups and sounds that we admire."

In his younger years, Keegan spent time in prog-rock and death metal bands, a world away from the looser style of Barn Burner.

"Yes, these days it's a lot less moving around the fretboard for me [laughs]. Coming from that prog-rock background, it's nice to be playing in band where I can stick in a groove for a longer period of time. Sometimes when we're writing, we'll find ourselves saying, "This is a great riff, why are we only playing it one time?" So now it's really cool to be able to sit back and meditate on a riff or groove," says Keegan.

Noisecreep asked the Barn Burner vocalist about the lyrical side of 'Bangers: II: Scum of the Earth.'

"It's a concept album in a sense," he replied. "An idea that is threaded throughout the lyrics is the whole 'good vs. evil' battle. The 'good' being those people who think for themselves and don't subscribe to a certain religion. That said, I'm not one of those 'f--- religion' type of people, and that's not what I necessarily wanted the lyrics to come off like. I'm talking about it more against those who go for a rigid sense of a religious ideology against people that want to be freer and think for themselves.

"I grew up in Kelowna, British Columbia, and it was a very fundamentalist Christian sort of place. I definitely had friends that were raised like that and I even went to some bible camps when I was young since they went [laughs]. I also have a religious study degree, so I'm kind of a nerd with that sort of stuff. As much as I'm fascinated with the history of religion, I'm also frustrated by the fundamentalist and extreme side of a lot of it."

Watch the video for 'Half Past Haggard'