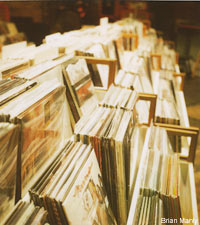 Last week, Rob Zombie's 'Hellbilly Deluxe 2' debuted at 8 on the Billboard Top 200 chart, and landed at 1 on the Hard Rock Chart, selling nearly 50,000 copies its first week at retailers. Charred Walls of the Damned's self-titled debut for Metal Blade capped off a flurry of pre-release activity by selling over 2,000 copies so far.

Carnifex, 'Hell Chose Me' (Victory): California's Carnifex are on their third full-length, and they keep the tradition of bone-liquefying, brain-vaporizing deathcore, ripe with blast beats, finger-numbing riffs and alternately barked and gut-wrenched growls. 'Hell Chose Me' has pockets of groove and melody, but never strays from full-on ferocity that has helped deathcore become the sub-genre du jour in the teen metal scene.

Chelsea Grin, 'Desolation of Eden' (Artery Foundation/Razor & Tie): As the first band signed to the Artery Foundation imprint through Razor & Tie, Chelsea Grin certainly make an indelible initial impression. 'Desolation of Eden' fuses death metal, grind and deathcore into a burst of chunky, groove-laden metal that'll scare the kids in the neighborhood. The title track and 'Sonnet of the Wretched' will make even the baby-fine hairs on the back of your neck rise. It's full of those pig-squealed vocals known as 'bree' style.

Story of the Year, 'The Constant' (Epitaph): They aren't instantly or definitively classifiable as a metal band, but Story of the Year certainly infuse their tunes with a hard rock bluster that has summoned many metalheads to this St. Louis band's lair. 'The Constant' exists on a bed of tension and release, and 'I'm Alive' and the riff-driven, punked-out anthem 'To the Burial' will entice and excite those with a taste for robust singalongs and melodic maelstrom.

Wrath and Rapture, 'Wrath and Rapture' (Tragic Hero): North Carolina quintet Wrath and Rapture keep things interesting on their self-titled release by coalescing black metal ambience, deathcore growls, lots of layers and a few asylum-worthy breakdowns on songs like 'Cosmic Wasteland' and 'A Breathtaking Tragedy.' The atmospheric keyboards prevent the band from falling victim to the 'just another deathcore' band category.