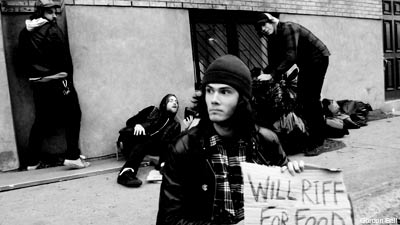 For quite a while now Barn Burner frontman Kevin Keegan has been juggling school along with the band, but come April, he will be done with college. So what does the guy that wrote 'Beer Today, Bong Tomorrow' spend time studying in the van while on tour? Why religion, of course. "I love it. It's the most interesting thing in the world," Keegan told Noisecreep via phone from Montreal. "A lot of people are surprised. A lot of people just see us as these banger dudes sitting around hitting the bong and f---ing playing metal, but that's not the case."

Keegan cited a desire to find out about his mother's Jewish heritage as what sparked him initially to pursue studying the Western faiths, but the road that led him to his major began after a rather common North American experience at a Christian camp that left him as a kid in a constant state of fear. "It was fun the first half of the week," he recalled. "All my friends went, so I decided it was a good idea to go, and they had these sermons at night. Every night, it was something light, but halfway through the week he started going on the hell fire and brimstone path. I was 13 at the time, so I was terrified."

Keegan's torment over the idea of an eternal pain caused by belief followed him back home. "I was haunted for months; I had this new fear. I would try and tell my parents, 'Mom, you better convert now or you're gonna burn in hell.'

"I was convinced and I was freaking out all the time. It wasn't healthy. So as I got out of that -- it was a gradual process -- it really f---ed me up," says Keegan, pointing out the exact moment he took on a fascination with religion. "When I looked back I got so interested in what gave that specific minister the right to tell me that so I began studying scripture and got really interested in it."

Not one to lie to himself, Keegan is well aware of the lack of job opportunities that are out in the world for a religious studies degree. "Unless I wanna do a masters and keep going from here, it might as well be a generic university degree to put on my résumé." But one option he could fall back on is being an ethical advisor for companies. "Corporations often hire people with religious studies degrees to look over documents and give well rounded ethical advice of the world's religions so you don't offend anyone," he said.

While on the topic of religion in music, Keegan admitted to a desire and growing curiosity in the Christian hardcore scene that was sparked in the late '90s. "It's not a big phenomenon here in Canada," he explained. "Growing up listening to hardcore and being into bands like Zao and Focal Point -- these bands that are brutally f---ing heavy but are singing about these things that I find to be even more terrifying than a black metal band singing about animal sacrifice."

Keegan laughed through the phone line, "These guys saying I'm going to go to hell if I don't believe what they believe, that's f---ing heavy man."