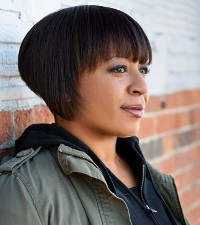 When Canadian-based journalist Laina Dawes' first book, What Are You Doing Here? A Black Woman's Life and Liberation in Heavy Metal, was published by Bazillion Points earlier this year, the curtain was raised on gender and race in metal.

"When you're dealing with black women, or women of color, you're dealing with both gender stereotypes and racial stereotypes and for black women in particular, the racialized, genderized stereotypes are way more pervasive and damaging than I would argue than for any other group of women in any other ethno-cultural group," Dawes explains to Noisecreep. "So I was always really interested as a fan and journalist, looking at those dynamics in the extreme scene. There's still these outside aspects of how society treats people and still permeates them within that scene. You can't pretend that once you're at a show, inside a venue, that the outside world doesn't exist. We bring it in with us."

In her book, Dawes recounts her own personal history, growing up black in her all-white adoptive family. Her early interest in metal came from family and friends and seeing KISS on television. Evolving into heavier bands, Dawes is a big underground hardcore and thrash fan. What Are You Doing Here? features interviews by other black female metal fans and musicians. The theme is clear: if you're a black woman into metal, you've probably been maligned or judged at least once at a show.

"Women are judged by what they look like," says Dawes. "Men, especially in metal, are judged by how well they can perform. So it's that same thing of the outside issues in society bringing themselves into this community. We can't pretend it doesn't exist."

Writing What Are You Doing Here? forced Dawes to be more honest with herself. She admits to judging other women - including African Americans - backstage at shows. It's something she says she recognizes and still works on today."I was at Maryland Deathfest last year. It was a crazy year because I saw a lot of women backstage wearing extremely inappropriate clothing and I just thought 'Jesus, what is this, 1980?' I was a little weirded out because I saw so many women who were obviously there with the bands – maybe they had relationships with the bands because they were backstage – but I still caught myself judging them."

For Dawes, the answer is to address the issue head on, collectively, as women.

"I don't want to have someone else looking at me or judging me. I have to figure out my own bias and judgments. Especially as a black woman, looking at a white woman, that's hard. There's these stereotypical, archetypical women metal fans. And I'm not one. And I never will be."

Like gender and scene stereotypes, Dawes tackles the issue of black culture and hip hop straight ahead. For Dawes, she sees society as actually moving backwardwhen it comes to the relationship of race, tolerance and music. For the tolerance shift, Dawes blames the infiltration of technology and the segregation of music formats in terms of radio and video."I've spoken to people 10 or 15 years younger than me. And people really think that black people should be listening to hip hop and R&B and white people should be listening to rock and country or whatever. They really find it surprising when you express your interest in something non-black centric. For my generation, from growing up in the '70s and '80s, it's perfectly natural to be attracted to different genres of music because that's what was played on the radio. That's what was on the top 40. A lot of women interviewed around my age we're all like 'Yeah, I grew up listening to Metallica' or 'I grew up listening to Black Sabbath because my dad loved it.' It was the generation they grew up in that actually gave them that opportunity to listen to a myriad of different types of music. We've reversed from that. In the '90s, hip hop blew up and was considered black-centric music and music that had emotional and psychological ties to a lot of African Americans. All of a sudden, there was a switch where 'You listen to that and I'll listen to this and we'll get along.' It is frustrating, at my age, to go to a metal show and people are looking at me like 'What are you doing here?' To me, it's very natural, but for them, I should be at the hip hop show down the street." 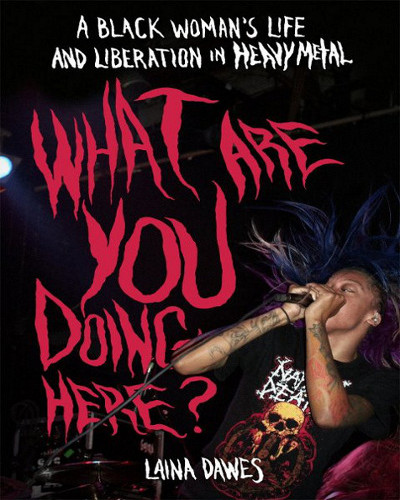 Ms. Dawes will participate in the SXSW panel 'Women in Metal: Why Is This Still An Issue in 2013?' on Friday, March 15. Noisecreep alum Kim Kellywill moderate the panel.

Pick up a copy of What Are You Doing Here? A Black Woman's Life and Liberation in Heavy Metal directly from Bazillion Points. Noisecreep recommends it.