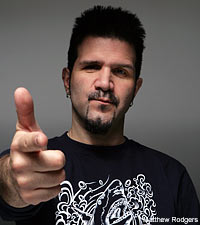 With the 'Among the Living' deluxe edition just about ready to hit the streets, Anthrax's Charlie Benante believes the fan reaction will be over the top about buying an album they already own!

"I think they will love it for the sound quality alone," Benante told Noisecreep. "It's loud. It has so much of the depth to it now. When you crank it in your car or iPod, you get the full effect now. The one that they already have, it's so thin, been so long since it was recorded!"

The band is merely taking advantage of new technologies and Benante himself admits he is a fan of deluxe versions. He said, "I own a few deluxe editions of records myself, I have a few Bob Marley editions that Universal has put out. I love them; they are awesome and they do a great job. I dug up old shots of the band from that time, so it's a cool package, whether or not you lived it at the time or are a new fan. You'll get the same effect."

Pouring through old shots of the band didn't make the skinsman feel old or ancient, though! "Nah, it's my daughter does that for me," he said. "We were in Japan doing a show recently and it never really hits me until someone brings it up, just how long we've been doing this. When I am on stage, I am 20-something again. There are days, don't get me wrong, when I feel a little different, but I am still that same person. And when I look at other bands, the same age, like Megadeth, who were on the bill. They are the same age, and age doesn't really matter or come into play with music.

"I hate when people come up to me and say, 'I used to listen to you when I was in high school.' I would get offended, because it's so final. It's like saying, 'Once I left high school, I threw out everything I had.' It's a stupid, ignorant remark to make, and I would say, 'Do you still watch 'Star Wars?' and they reply, 'Of course!' So why do you still watch these movies and not listen to that type of music. You're an idiot"

Universal is also releasing a double DVD called 'Caught in a Mosh,' that was previously issued in the U.K. The band had minimal input into this release. "We never gave final approval, though it was cool," Benante said. "Maybe fans will be into. We gave it the go ahead, but we're 100 percent behind the 'Among the Living' reissue."