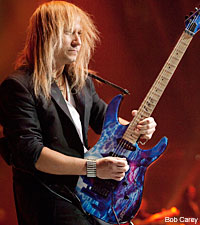 'House Of Insanity' is the new solo album from Trans-Siberian Orchestra and Savatage guitarist Chris Caffery. On it, he traverses thrash, pop and reggae.

Former Megadeth guitarist Glen Drover makes a guest appearance on 'The Fleas'. Caffery told Noisecreep, "Glen and I are really good friends. I'd played a solo on the one Eidolon CD (The Parallel Otherworld) with Glen and (his brother, drummer) Shawn. There was actually a point where, if I'd had a little better budget, I was considering going to Canada and working with Glen and/or Jeff Waters (Annihilator) to do the CD. But the way the business was, the time and money I had to do 'House Of Insanity,' I decided to do it myself. I had a particular feel and sound in my head for this part at the beginning of that song with the guitar harmonies. I wanted something that was very much in that kind of a realm, that I knew Glen could do. I sent him the track and when he sent it back, it was absolutely perfect. When he did it, he obviously spoke for the song. He wasn't just wailing. I told him I wanted a melody that would recur at the end. What I had in my head, I wouldn't necessarily have struggled to do, but it wasn't exactly my style. Glen's a brilliant player and the Drover brothers are two of my favourite people in the world. So I was really proud to have him on the album."

'Madonna' follows 'The Fleas'. Misleading though it may be, Caffery is not paying homage to the world famous pop star. "Actually, that song was written about a relationship in my life. The word Madonna, for me, always fit into the chorus. I was kind of battling whether or not to use it 'cause people would talk about Madonna the singer. But there's a much more famous, prevalent and important Madonna than the singer. No offense to Madonna, she's obviously a pop icon and she's done tremendous things. But to have any one person own a name, to me was kind of ridiculous. So I thought it was a bit of a ballsy move 'cause I knew, people would always make reference to Madonna the pop artist. But this song to me is representing somebody that was really strong in my heart. To a lot of people in this world, the female person Madonna is very precious, and it's not the pop singer. When I was writing the song, the name fit. I didn't want to put the girl's name in it, so I picked the most popular, and it had nothing to do with Madonna the pop singer."

The final song on House Of Insanity is a cover of the Bob Marley classic, 'Get Up, Stand Up!' Says Caffery, "I was sitting in the Hard Rock Café in New York City having dinner with some friends and this video came on. I'm watching Bob Marley and the Wailers sing this song. Image wise, they were metal. Not in the sense of leather and studs, but it was strong in the long hair and it was dark. The message in that song, and that song itself, was very un-reggae. The whole pure essence of reggae, a lot of it is the happy, get stoned kind of thing; Bob Marley had a lot of political lyrics. With that song in particular, if you listen to what it's saying, it's basically telling people that you have to take control of your lives. You have to make sure that you are going to make a change. By me doing the whole entire record myself, it was like a stamp at the end. As much as it was recorded a reggae song, I think the message was extremely non-reggae. It was very much pro-human, even to a sense of what you listen (President Barrack) Obama preach to every day. If anything is going to change, people have to do it themselves. That is what that song said decades ago. The obvious was pointed out in that song a long time ago. Beyond God and religion, it has to come down to you the individual. People have to change things. You can't sit and wait and watch and hope somebody else is going to do it. The song is very militant. It's an extremely metal message and metal tune. When I recorded the demo for it, I really liked the version of the song and I wanted it on the record."