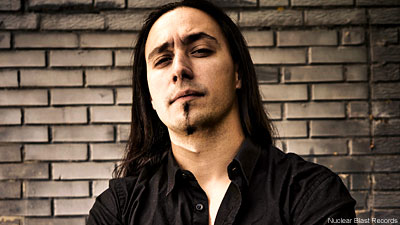 Judging from Mnemic's fourth album, 'Sons of the System,' it's pretty clear that the band members have eclectic musical tastes. The way vocalist Guillaume Bideau combines hellfire screams with steely melodic vocals and keyboard samples is definitely reminiscent of Fear Factory, the intermingling of machine-gun beats, blowtorch riffs and angular rhythms is redolent of Meshuggah and the abrupt staccato guitar blasts were surely born of Sepultura. But there's also a melodic rock sensibility there that only comes from repeat exposure to bands like Europe, Journey and maybe Lacuna Coil.

So we weren't at all surprised when Mnemic guitarist and songwriter Mircea Gabriel Eftemie submitted an iPod shuffle that ranged from jazz to technical death metal. However, Eftemie sure was.

"I am quite surprised the list did jump in so many directions with so many different genres," he told Noisecreep. "Usually it shuffles between Nine Inch Nails and death metal, but I guess this time it went berserk. I don't think it's quite representative, as I usually never really listen to Mötley Crüe, or King Diamond for that matter. And every time I land on a Cannibal Corpse song, I usually skip it 'cause it gives me a headache."

We're guessing Eftemie also usually skips over Primus' 'Bob,' Korn's 'All in the Family,' General Surgery's 'Ambulance Chaser' and maybe even Iron Maiden's 'The Number of the Beast.' However, one track we thought was definitely an aberration, Fatboy Slim's electronica-fueled cover of Cornershop's 'Brimful of Asha,' is actually representative of Eftemie's listening habits.

"I have been listening to lots of drum 'n' bass artists and a lot of Bob Marley," he said. "And, of course, I've also been cranking the new Mnemic album, 'Sons of the System.'"

Way to get that in there. Mircea Gabriel Eftemie, Your iPod is showing:

Mötley Crüe -- 'She Goes Down'

King Diamond -- 'Give Me Your Soul'

Iron Maiden -- 'The Number of the Beast'

Nevermore -- 'Next in Line'

Necrophagist -- 'To Breathe in a Casket'

Rage Against the Machine -- 'Know Your Enemy'