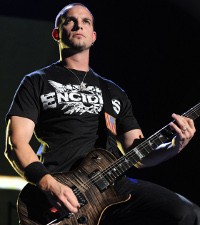 This week, Alter Bridge releases Live at Wembley, a 21-song, two-DVD set complete with a documentary. A 3D version of the new DVD/Blu-ray will be released this coming summer.

The melodic greats pulled out all of the stops to create the complete Alter Bridge experience, recording their Nov. 29, 2011 headline appearance at the hallowed Wembley Arena. The DVD follows the band's successful 2009 Live From Amsterdam concert film.

Noisecreep spoke to guitarist Mark Tremonti, also a member of Creed, about the differences between the two DVDs filmed in European locales, which songs fans must watch and if the band will ever film a DVD in its native U.S.

Why did you decide to do another live DVD?

When we had the Wembley date, we decided we wanted to film that. We wanted to film the previous London show before the Amsterdam DVD taping, but we had technical difficulties, so we did in Amsterdam instead, which is our other favorite market. We released a new record with new songs [AB III] and we were on our first arena tour with Alter Bridge. All the behind-the-scenes stuff was easy, with people following us, showing what we do off the stage, preparing for shows. We had great 3D cameras and a great crew that captured things we haven't seen before.

3D is all the rage in theaters. Why did you decide to do the DVD as such, which will be released as a Blu-ray and in theaters this summer.

In our case, the director loved getting the new technology and making it the best it could be. We didn't say no [laughs]. We wanted to 3D our show. I haven't watched it yet since I don't have a 3D capable TV yet, so I'll figure it out.

Do you think that Live at Wembley is superior to the previous DVD? I know, hard question.

I would not say one is better than the other. We are proud of Live in Amsterdam, since it was special night for us. But this is new, with new songs and the documentary as well. There are also 21 songs, and being in Wembley is special.

Out of the 21 songs, which is "must watch" for every Alter Bridge fan? Is there one they should gravitate to first?

Every night we do "Blackbird" and it is the key moment of the set, since that is where the band is most emotional, giving it our all. It's also a favorite song.

Is it hard to perform naturally with the cameras in your face? Is it uncomfortable? Do you like it? Can you ignore it?

Ah, you get used to it. Everyday they do cameras and monitors at festival shows when you are playing. I forgot that camera was there and almost stepped on it. [Laughs]

Does it catch you making faces?

My faces are crazy. People make comments about my crazy stage faces all the time. It's embarrassing, so I try not to think about it. 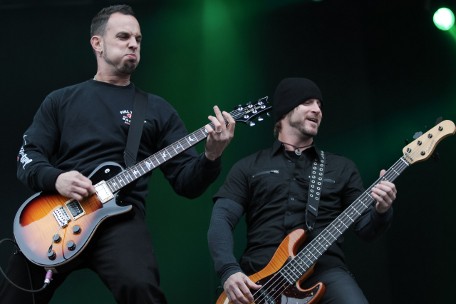 Be a "tour guide" for the documentary – why is it worth watching, in your opinion?

It is a cool look into our lives and how we deal with one another, as well as how we live on the road and how we prep for shows. It's well done.

Let's talk about you for a second. You are juggling two major rock bands - Alter Bridge and Creed. How do you maintain that type of stamina?

I have always had a big well to draw from. Before I tried to become a guitar player, I was writing songs and logging ideas. Since I was always writing new material and with the different bands, I had to come up with my own personal intuition to keep the bands separate and have a filter for what works with each band. When I write, I don't write for a project. I write to have fun and go back and assess if this will fit Creed or Alter Bridge.

Will you ever film any of the Creed shows in the same way?

We don't have anything scheduled at this point, but stuff always seems to happen when we are on tour. We will get the ball rolling. The shows do well, so I think we need to document them.

For this show, was it a typical -- if there is such a thing-- Alter Bridge live set list or did you specifically curate for this show because it was being filmed?

All the songs were good, high-energy tunes. Our normal sets are two or three songs less, so it was basically a normal set, plus two or three more songs.

So tell us something about you not related to music?

I'm a guitar fanatic. I love to collect amplifiers. A lot of people call me a hoarder. I love to read books. I love reading and ping-pong.

Do you have a Nook or an e-reader or do you prefer the real thing?

I have a Kindle Fire. I like to have the book. I keep them on the shelf, in order of how much I like it.

I hated reading while growing up and in college, but when I got on tour, and was stuck on a tour bus, I read. I don't play video games and if not playing my guitar, in my free time, I am reading or spending time with my kids.

What is your favorite book then?

Tough to say, but Game of Thrones is one of my favorites.

Okay, so you've filmed DVDs in London and Amsterdam. What about the good ol' US of A? Are we going to get Live at Insert Venue Name or City in America Here?

Aw jeez, maybe the Pine Knob in Detroit. I don't know what it's called now, but that's what it called while I was growing up.

Alter Bridge's Live at Wembley is out now.