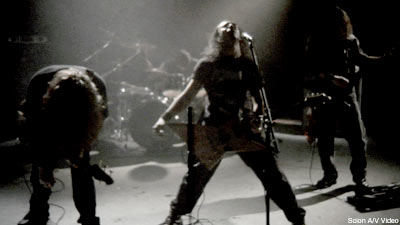 There aren't many bands like Acrassicauda. That's because there aren't many thrash metal bands from Iraq. There also aren't many thrash metal acts who've been forced to flee their native lands for Syria, because of the explosive violence happening all around them. Acrassicauda are survivors who've resettled in America and plan to release 'Only the Dead See the End of the War' EP on March 9. Noisecreep is proud to present the world premiere of Acrassicauda's first video from that effort, 'Garden of Stones,' from the Scion A/V Video Initiative.


As you'll see, the video is very metal, with the band performing and headbanging in a dimly-lit space in Brooklyn, with black and white war footage filling the space behind them: rubble from destroyed buildings, atomic bombs dropping from the skies. The video is directed by Bernardo Loyola, who worked on the documentary film 'Heavy Metal in Baghdad,' which told the story of Acrassicauda and premiered at the 2007 Toronto International Film Festival.

"After working on the 'Heavy Metal in Baghdad' documentary and being so close to the story of the band, the text at the end of the film always felt sad but also felt like a promise ... the band is still looking for a place where they could grow their hair long, bang their heads and play music as loud as they wanted," Loyola tells Noisecreep about the video for 'Garden of Stones.' "They have found that place now, and that's what I wanted to convey in the video. I wanted to show a good heavy metal band playing hard and loud. I wanted to show a band that, no matter how much s--- gets thrown at them, no matter if everything is falling apart around them, no matter how many difficulties they have gone through, they are finally doing what they want -- and what they are good at."