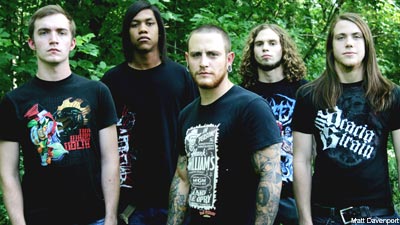 A Different Breed of Killer drummer Nija Walker has been a student of recording technologies for eight years, and he has worked directly under world-renowned mastering engineer Seva at SoundCurrent Mastering in Knoxville, Tenn. Given his impressive background, it makes sense that Walker and his band will be recording their next album, 'The City,' in Dolby 5.1 Surround Sound. This is the first time -- admittedly, to the best of the band's knowledge -- that a death metal band has attempted such a feat of sound.

"Surround sound uses a range of techniques to enrich the sound quality of an audio source with audio channels reproduced by additional speakers," Walker told Noisecreep. "The three-dimensional sphere of human hearing can be virtually achieved with audio channels above and below the listener. Surround sound allows the music to encircle the audience and go beyond the standard left-right speaker setup. The music is able to (almost) literally move around you."

So how will this specifically impact 'The City'? Well, according to Walker, you'll be able to hear new things, or old ones, in a different way. "Sounds will come from all directions, even above and below you, in a less predictable pattern than traditional records," the skinsman said. "Imagine hearing a drum fill racing by you, or a creepy vocal line behind you, in a dark room. Picture, if you will, the sound of five channels of guitar tracks. Those are the experiences you can expect." We got chills just thinking about it!

While the average listener may wonder if the album will be too big or too loud, Walker and ADBOK aren't concerned with such nonsense. "I don't think you can bring me a record that sounds too big. But, luckily for fans of the normal way we record music, this album will include two discs. One will be in 5.1 surround, and the other will be in plain ol' stereo."

ADBOK wanted to make an album that was memorable, and recording in 5.1 was a way to achieve such a noble and worthwhile goal. "We wanted to do something that made us feel like we were able to contribute to death metal as a whole," Walker said. "We believe this album is only going to open the door for future records that may in fact be more refined or polished than ours. We're fans too, you know? We wanted to inject some life into this entity that we all know and love called death metal." Even more simply, Walker admitted, "We wanted our sophomore album to sound great. And it will!"

Conceptually, 'The City' is a brainy, thinking man's album, as it deals with a futuristic theme, featuring residents of a post-apocalyptic settlement in North America circa 2020 AD. "Times have changed dramatically, and a sort of martial law is inflicted upon this New World Order," Walker revealed. "The city itself is separated into districts, much like modern-day New York City. The difference is each borough has its own ownership of a certain part of the things that allow us to live. For example, District 2: Oxygenopolis. The residents of this district have released a gas into the air which makes it impossible to breathe without the antidote. Don't pay District 2? You die. This is only a small sample of the struggles the settlers of this city endure. It is this pre-determined, modern-day apartheid that causes the city to erupt in anger, triggering an even worse disaster."

A yet-to-be-determined label will release 'The City,' since the band has parted company with its former home, Rise Records. "At the time, we do not feel that our goals are in line with those of Rise Records," Walker said. "We have fully fulfilled our contract obligations and are ready to move on to bigger and better things. We're eternally grateful for the chance that we received from Rise, and we're eager to see what's next."

A Different Breed of Killer Tour Dates
on TourTracker.com