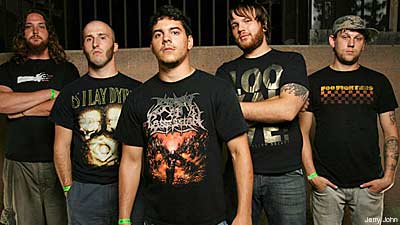 Through the Eyes of the Dead have titled their new album 'Skepsis,' which loosely translates to a philosophical doubt, according to guitarist and sole original member Justin Longshore. If anything, Longshore has reason to be skeptical, since his band replaces members more often than some bands change socks.

"Danny came up with this concept," Longshore told Noisecreep, referring to the band's new singer, 20-year-old Danny Rodriguez. "I screw it up when I try and explain it when I do interviews for it, so I'll do my best. The album's concept is about a character who is a schizophrenic who believes reality is an illusion and he has a recurring dream of the apocalypse and how his paranoia grows and takes control. It's really about how the brain can control someone and change everything for them. I don't want to give too much more away, but it's pretty much how the mind can control everything and you can go insane. I've been reading about asylums and stuff like what happens inside of them."

The band decided to go a different route on this album, "instead of typical horror-type, zombie theme that metal bands do, we changed it up." The guitarist said that 'Skepsis' isn't the end-all, be-all of the concept either and that the band may "continue on with this story on the next album. There is more to it."

A concept/themed album is something Longshore has always wanted to do but it never materialized. Until now. "Danny set off the idea and created it out of what he was reading," Longshore said. "He is a smart kid. He presented it to us and we were stoked."

TTEOTD plucked the uber-young Rodriguez from the depths of obscurity before a fully booked tour. "When ... Nate left, we had a tour with Whitechapel coming up, and they recommended someone from their area. And he came to my house, we drove to practice and once he got there, he said he needed to go home and that his anxiety was bothering him, but that he would be back. We e were like, 'Um, OK.' We were sketched on him wanting go home already and knew he couldn't do a tour.

"Danny had tried out before, and he was second to this guy. So we called Danny and asked for an in-person tryout. He said, 'How soon do I need to be there?' And we said, 'Can you be here tomorrow?' He bought a plane ticket right away, and that was how we saw that he wanted to be in the band. We were crossing our fingers that he would not suck, since we had a huge tour that could not be done without a singer. He has been perfect for us!"

As for that other dude who got all anxious? He didn't come back, but TTEOTD are friends with him still. He's in A Different Breed of Killer.

'Skepsis' is out Feb. 2 via Prosthetic.

Download Through the Eyes of the Dead Songs
Filed Under: A Different Breed of Killer, ADifferentBreedOfKiller, Through The Eyes Of The Dead, ThroughTheEyesOfTheDead, whitechapel
Categories: Interviews
Comments
Leave A Comment
10 Greatest Deathcore Bands
Trivium Book Fall 2022 Tour With Between the Buried and Me, Whitechapel + Khemmis
As I Lay Dying Announce ‘Two Decades of Destruction’ Tour With Whitechapel + More
How Metallica’s Kirk Hammett Lost His Porsche
50 Rock + Metal Albums Turning 10 in 2022
Whitechapel’s Phil Bozeman Not Concerned About Reaction to Broadening Their Style
The 45 Best Rock + Metal Albums of 2021
Newly Installed Whitechapel Drummer Alex Rudinger Says He’s Left the Band
Whitechapel’s Ben Savage Plays His Favorite Guitar Riffs