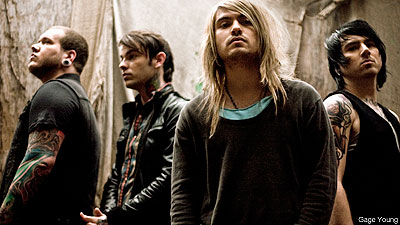 When shooting the video for 'Pieces,' from their Wind Up Records debut album, "Human Resources," which came out in late May, Orlando, Fla. rockers It's Alive discovered something about themselves unexpectedly.

"There's a bit of magic in the performance we gave that night," vocalist Zach Webb told Noisecreep, recalling the shoot. "I saw a side of us I didn't even know we had: this primal, raw, powerful side of each one of us that I'm very proud was captured in video. I hope you guys like it." You can watch the video now, as Noisecreep is proud to exclusively premiere it.

The song is certainly one that could fill arenas if It's Alive get on the right tours and stay out on the road, winning over fans. It's Alive will tour with Sick Puppies beginning July 7, so the seeds of greatness are being planted.

The video, directed by Alex Purifoy and produced by The Undesigned, shows the band performing in front of a barn, late at night. It's a stark contrast, since the band members all look like they have rock star in their DNA, as they are well-coiffed and leather-clad, yet they seem so at home performing in what looks like America's heartland.

"We chose 'Pieces' as the first single from our album 'Human Resources' because we wanted to come in fast, hard and let people know we mean business," Webb also said. "This song is so in your face. It's a great introduction to what we really felt It's Alive was all about."