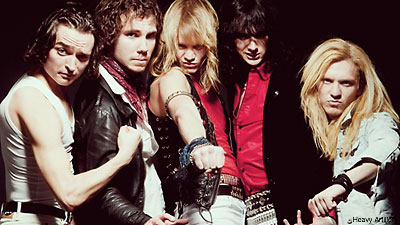 Enforcer just released 'Diamonds,' the Swedish act's sophomore album. It's essential listening for any Noisecreep readers who like their metal lean, mean and surrounded by arena-worthy choruses. Adam Zaars and Joseph Thall step up as a guitar team we should all keep our eyes on, while vocalist Olaf Wikstrand proves that all of the touring the band did in support of their debut album, 'Into the Night,' has only strengthened his already powerhouse vocal chops.

We wanted to learn more about Enforcer and their Swedish heavy metal upbringings, so Noisecreep made some calls and got in touch with Heavy Artillery, the band's U.S. label, and asked them to hook us up with an interview.

You come from Sweden, which is famous for its rich history in death metal and hard rock. How young were you when you first became aware of that?

I have always listened to Swedish artists such as Europe and Entombed, but I wasn't aware of the legacy of older metal till I got a bit older. When I started to grow a genuine interest for all kinds of heavy metal, I began to explore the Swedish scene much deeper. Around seven or eight years ago, I really became aware of it. But almost all countries have had great scenes for heavy metal -- especially in the '80s. Places like Germany (Scorpions, Running Wild, Mad Max), France (Sortilege, Blaspheme, H-Bomb) and so on.

How easy was it getting older metal albums in your town? Have record stores become as scarce there as they are here in the States?

Compared to the States, it's pretty easy to get hold of the records that I want here, if it's not a mega rare release or something. I guess the metal scenes in the '70s and '80s were more local to Europe, so those records are a bit easier to get a hold of here. I would imagine it's the same for everyone in the States with your own artists.

Is teaching English in school a mandatory thing? The overwhelming majority of metal and hard rock bands don't sing in Swedish, so I wanted to see how you came to learn English.

We usually start to study English in school when we are about 10 years old. Since English is pretty much the world language, you are exposed to it all the time. Most of the films I watch and most of the music I listen to are in English, so you also learn a lot from that.

Do you generally write your lyrics in Swedish first and then translate them over to English?

We always write in English from the get-go, so there's no need to translate anything. Sometimes I come up with a sentence or something in Swedish that I translate, but usually I think and write in English when I'm writing music for Enforcer.

You toured North America in support of your first album, 'Into the Night.' What were your impressions of the United States and Canada?

It's a f---ing big country [laughter]! But seriously, the overall impression we got was very good. People are really friendly and supportive of the music, and overall, the audience was very into the music. I don't know if there are many bands like us over there or not, but I felt pretty exclusive as a heavy metal group on tour in the States.

Did you find that people here had a preconceived notion of what Swedes were like?

Not really. Overall, people were very open-minded about us. I don't think we are any different than American people. We breed from the same culture, so very few things separate us culturally.

Can I name two? They are pretty different, but I can't just pick one.

OK, 'Bathory' (1984) from Bathory and 'Turn on the Power' (1986) from Mindless Sinner are my two favorite Swedish metal albums.