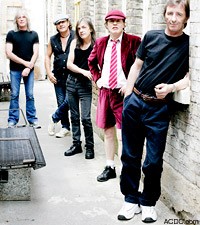 'Iron Man 2' is in theaters nationwide now. The film is based on the Marvel Comics character of the same name and is directed by Jon Favreau, starring Robert Downey Jr. As with all big-budget Hollywood flicks, music plays an important role and this film features choice cuts by one of the world's biggest rock bands, AC/DC.

AC/DC released the album 'Iron Man 2' earlier this year. While there are no new tracks on 'Iron Man 2,' the record does span 10 different classic AC/DC discs. This means you're getting some of the band's biggest hits -- and deeper cuts to boot. To celebrate the movie and new album, everyone at Noisecreep decided it would be fun to countdown the most popular AC/DC tracks from AOL radio.

'Rock 'n' Roll Train' is the first single from the 2008 album 'Black Ice.' The single went to the top of the Billboard Hot Mainstream Rock list. Like most AC/DC tunes, 'Rock 'n' Roll Train' was written by the brothers Angus and Malcolm Young. If you saw AC/DC on their recent and massive world tour, then you know 'Rock 'n' Roll Train' played a big role in the show -- complete with a massive locomotive as a stage prop.

Turns out 'T.N.T.' really is dynamite when referring to AC/DC's catalog. The title track from the album 'T.N.T.,' the track was written by the brothers Young and late singer Bon Scott. Released as a single in 1976, 'T.N.T.' quickly became synonymous with AC/DC. Maybe it's all the letters? Or maybe it's just the fact that 'T.N.T.' has a strong riff that gets stuck in the listener's head for days and days.

And then there was 'Back in Black,' and suddenly no band could ever reach the same level as AC/DC. The album 'Back in Black,' released in 1980, was written by the brothers Young and Johnson and produced by Mutt Lange. It was the first AC/DC album to feature Brian Johnson on vocals, and the entire disc is dedicated to fallen friend Bon Scott. The single 'Back in Black' is a specific, upbeat tribute to Scott, with lyrics like: "Forget the hearse 'cause I'll never die/I got nine lives/Cat's eyes/Usin' every one of them and running wild." The opening guitar riff is undeniable - hear two bars and you're on your feet. 'Back in Black' is also featured on the 'Iron Man 2' album.

Frankly, all of us at Noisecreep are a little stunned. We thought for sure 'You Shoot Me All Night Long' would come in at number one on the most-listened AC/DC songs. After all, we grew up with this track, and it was overplayed at every high school dance and college kegger we can (somewhat) remember. The track was a successful single, staying on the charts for a long time and helped propel sales of 'Back in Black.' The track features a great guitar solo that has been attempted by every kid with a rock star dream. Oh, and 'You Shook Me All Night Long' has been covered by everyone ... including Celine Dion and Shania Twain.

You ever hear your grandma say 'Hells Bells' after something went wrong in the kitchen? Maybe AC/DC picked up the phrase from her. Regardless, the song is the opening track from 'Back in Black,' and the ominous tolling bells clue the listener that a mega sonic experience is about to occur. Like many other popular AC/DC tracks, 'Hells Bells' is regularly used at sporting events.

Alas, we've reached the top of our countdown. And really, haven't we all been on a highway to hell at some point in our lives? 'Highway to Hell' is the title track from the 1979 album, written by the Young brothers and Scott. The song 'Highway to Hell' made the Rock and Roll Hall of Fame's list of 500 tracks that shaped the genre. The track also caused parental uproar, what with all the silly Satanist rumors floating around. The members of AC/DC might not be Satanists, but they are smart marketers: the song, coupled with Angus Young's penchant for devil horns, sure does make for a nice merchandise idea. The blinky AC/DC inscribed devil horns sold during the 'Black Ice' world tour fetched something like 20 bucks a pair! But back to 'Highway to Hell.' The album will always be significant in the AC/DC catalog because it is the last to feature Bon Scott. 'Highway to Hell' remains a live staple.

So, what do you think? Surprised by what your friends are listening to the most? What songs would you add or drop from the list? Leave a comment and let us know.

Filed Under: AC/DC
Categories: Lists
Comments
Leave A Comment
Back To Top