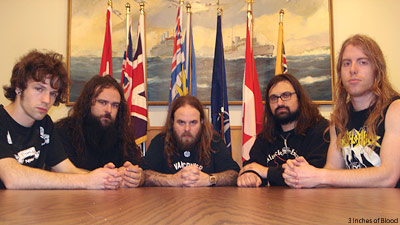 When 3 Inches of Blood guitarist Shane Clark joined the band, his physique and furry beard often caused fans to mistake him for vocalist Cam Pipes -- yes, that's the name on his legal documents -- who is similarly built and also boasts tons of chin pubes.

"It doesn't happen as much anymore, actually," Clark told Noisecreep from his home in Vancouver. "For a long time, people did, though, since we have the same beard, hair and build. And we're the same height. We kinda look the same when I am not playing guitar. But now it's reverse. People think he's me! If you see us a lot, the repetition will stop you from making that mistake a bunch."

Die-hard 3 Inches of Blood fans know the band has dealt with lots of turnover, splitting time and members between the U.S. and Canada. Second vocalist Jamie Hooper is gone forever, having hit a roadblock with voice problems after 2007's 'Fire Up the Blades.' The band is on the cusp of releasing 'Here Waits They Doom,' and the more things have changed, the more they've actually stabilized for these defenders of the faith.

"His voice got damaged and in the interim, he figured it out and we had to continue and keep doing this," Clark explained about Hoops' not-so-obvious departure. "We continued for so long, and he just didn't have the confidence of his voice being the same anymore. If anything, we tour more now than ever. He made the call, and it's about health being number one. We're happy. [Guitarist Justin Hagberg] is doing the screams now, and the dual vocal dynamic is still there, but it's more Cam Pipes as the frontman and lead vocalist. You can hear Justin, who has his own style, which is abrasive. And it's cool, because he isn't imitating Hoops; yet that dynamic makes 3 Inches what it is."

Bassist Nick Cates is also out of the band, and instead of hiring and acclimating an 'official replacement,' 3IOB is employing a touring bassist named Steve. "Gone are the days of getting people in the band," Clark said. "There is a trust level needed now, since so many people have left the band. We'll go the touring bassist route, and with Steve, the band is fully Canadian again."

Quick, someone cue 'Oh Canada!' In the meantime, 'Here Waits Thy Doom' is out next month on Century Media.