They formed back in 1999 in Knoxville, Tenn. and since then the veteran combo known as 10 Years have remained at the forefront of the post-grunge movement. Now, just after release of their new album, Minus the Machine, the group is currently out on a headlining tour.

The "Cutting Like Knives" tour features support from The Red Jumpsuit Apparatus and The Last Place You Look. For this run, 10 Years features guest bassist Ryan Collier of the prog-rock band Fair to Midland, temporarily replacing Lewis Cosby, who is taking time off to prepare for the birth of his first child.

Noisecreep had the recent pleasure of speaking with 10 Years vocalist Jesse Hasek and got some background on his upbringing and musical evolution.

The response to Minus the Machine has been stellar, not the critical acclaim is why you do this.

Definitely. I think that it's one of those things, that I try to be an artist and not always strive for the mainstream. It's a longer road traveled but your work has more substance. We're not good at completely trying to cross over. We can play the game a bit, but we love to challenge ourselves and we really did that this time out.

The sound seems like a bit of a departure for the band.

It's different but not too radical, it shouldn't not freak out old 10 Years fans. Every album is different enough and I think our fans get something from all of them. But as a band we wanted to challenge ourselves to do something different and we think we did that.

What inspired you as a singer growing up?

I grew up in church, and they always tried to stick me in the choir so I was always around melodies and stuff growing up. Some of the first albums for me were Alice and Chains, Nirvana and the first Tool record. Those are the ones that did it for me. I had an older sister. She'd go through different things and got me turned on to a lot of cool music I probably would not have found otherwise.

Was there a first show that inspired you?

Being a front man happened much later for me. I was going to college for art and had never thought about being a front man in band, so it happened when I was like 20. As a kid I'd go to underground punk clubs and the energy in there taught me a lot about what I do today. We still thrive in a club environment because of the energy and closeness and intensity.

Is there any advice you give young singers today?

I always run into kids that have questions. Before the internet you just tried to be as pro as you could and try to write good music – but today the Internet is like the X factor. There's lots of networking that can be done and that is important, but I tell kids to always pay most attention to the music. Don't ever skimp on the recording – that's what matters most. And have fun. 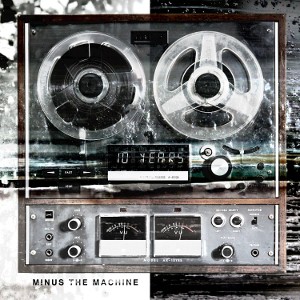 Minus the Machine is out now and available on iTunes and Amazon.