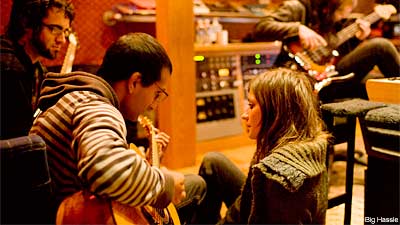 Flyleaf, featuring pint-sized powerhouse Lacey Mosley on vocals, will embark on a headline tour of the U.S., launching May 4. The band has virtually resided on the road for the past several years. Fair to Midland and 10 Years will appear in the support slots. Flyleaf will be supporting their latest, 'Memento Mori,' which features the smash single 'Again,' which is currently climbing the radio charts.

"If you are ready for some new Flyleaf, then get ready to be at least mildly appeased, as we are preparing to embark on a U.S. tour in May in support of our new album, 'Memento Mori,' and new singles 'Chasm' and 'Missing,'" bassist Pat Seals told Noiscreep. "Our good friends Ten Years and Fair to Midland will be assisting us in this endeavor, which we have dubbed 'Unite & Fight,' and all 15 or so band members involved are looking forward to performing in a city that is in some reasonable proximity to you, except Alaska and Hawaii this time."

Die-hard Flyleafers have the chance to purchase limited-edition, VIP tour packages that allow early entry into the show, a signed poster and other perks befitting a very important person. But the VIP packages serve a charitable purpose, as well. "The proceeds are going to the charitable Flyleaf Foundation," Seals said. "I personally hope to see you there."

Flyleaf have further proven their philanthropic vibe, too, as 'Break Your Knees,' a track on the expanded edition of 'Memento Mori,' was used for 'Healing 4 Haiti,' a benefit comp available at the iTunes store.