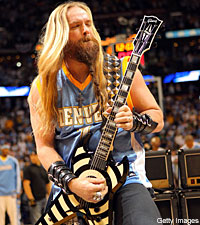 Black Label Society singer/axeman Zakk Wylde playing the National Anthem at the Denver Nuggets - Los Angeles Lakers basketball game is indicative of his love of sports and his country.

"I do them all the time. I do it live every night in my guitar solo. I've been doing it for years. It's not a big deal. I love playing it. I've done it for the Rangers, the Kings, the Dodgers, f---ing, Mets, Portland Trailblazers--hockey and basketball and baseball. I just love sports. Baseball, football, f-cking boxing, hockey, the whole thing." 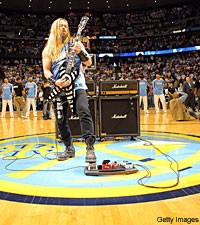 Wylde is enjoying watching hockey's Stanley Cup finals, pitting the Detroit Red Wings against the Pittsburgh Penguins. But he has more fun taunting his bandmates.

"JD (bassist John DeServio) was watching them (the playoffs) because the f-cking Rangers were in the playoffs," Wylde said. "He's a Rangers guy. Obviously they got crushed. I asked JD, 'Who do the f---ing Rangers hate the f---ing most?' He said, 'The Islanders, Flyers, Devils, Boston.' 'I said, 'Really? Those are my four f---ing favorite teams.' He called me a f---ing douchebag.' I was saying it just to be an a--hole. It's always a good time to be around a bunch of goofballs all the time."

Wylde performed the National Anthem while on a break from touring. In July, Black Label Society will embark on a package jaunt that also includes performances by the likes of Static-X and Mudvayne. 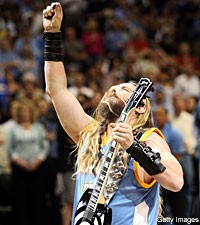 "We've gonna f---ing cruise out with Mudvayne and Static-X," Wylde said. "It's a small world, so everybody knows everybody. I've known the guys since the Ozzfest. So we're going to have a f---ing blast. (It will be) Static-X, Mudvayne, a couple guys from Type O Negative started their own band so they got that thing going on. Five Finger Death Punch. There's six bands on the f---ing bill so we're going to have a good f---ing time."

In the meantime, he's just resting until the next gig.

"I'm just trying to remain sexy at all times," Wylde said. "It's Sunday, so I'm just recharging the sexiness batteries."