As Noisecreep previously reported, last week (Oct. 12), the famed Rock 'n' Roll Fantasy Camp opened up its brand new facility in Las Vegas, Nev., where the camp will now be based. Noisecreep had the privilege of having unfettered access throughout the week, and we captured what we consider to be some pretty special material.

We were there the moment Zakk Wylde arrived at the beautiful MGM Grand Hotel in Vegas where much of the camp activity is now centered. That's because in addition to its new rehearsal and recording studios located just off the strip, the Rock 'n' Roll Fantasy Camp also unveiled its new showpiece within the spectacular MGM Grand - - two beautiful, state of the art rehearsal/recording "pods" located right on the casino floor.

There are fishbowl-style viewing windows so that passersby by can observe the rock star/camper interactions. The new Vegas-based concept was the brainchild of camp founder David Fishof who has been working closely with the hotel to forge a co-branding relationship that seemed to go very well in its inaugural week. For years the camp had been based primarily in Los Angeles, while hosting camp events at other cities around the world. 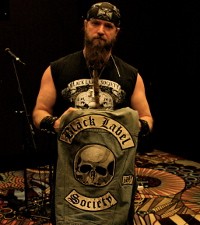 But now it's all about Vegas, and if the first camp is any indication, the camp could not have found a better home than the city, or the hotel.

Getting back to Wylde, we spoke to him right as he arrived and then were there to watch as he went room to room with each group of campers, shredding, coaching, telling stories and signing autographs.

But it got even better once the sun went down as the Black Label Society frontman came back to the hotel from the rehearsal space and jammed onstage with each camper band at the MGM Grand's club, Rouge.

Get more information about Rock 'n' Roll Fantasy Camp at their official site. 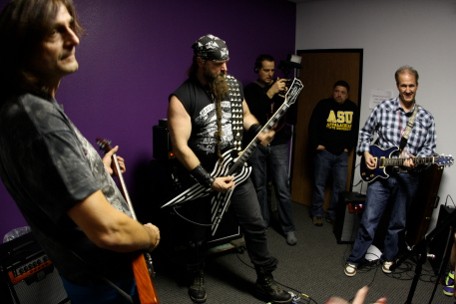