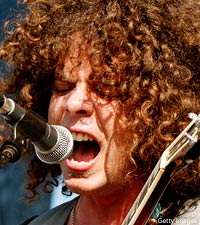 Chilling poolside in Los Angeles, Wolfmother lead singer Andrew Stockdale is soft-spoken, a real contrast to his face-melting tunes. But his voice rises when asked about the excitement building around the Oct. 13 release of his band's sophomore effort, "Cosmic Egg."

"I worked on it on and off for, like, two years," Stockdale told Noisecreep. "It's going to be so nice to have it out. We started on it whilst we were touring the first record. I tried writing a few songs and went into the studio and wrote, like, five songs in 2007, and then 10 songs later in early through mid-2008. I wrote three or four songs just the start of this year. I wrote it here and there over the last couple of years."

It's been a long couple of years for Stockdale. The Australian originally paired up with fellow countrymen bassist and keyboardist Chris Ross and drummer Myles Heskett on the band's 2005 self-titled debut. But in August 2008, Stockdale suffered a blow. The co-founding members left the band due to "irreconcilable personal and musical differences." After a brief hiatus, Stockdale returned with new musicians: bassist and keyboardist Ian Peres, guitarist Aidan Nemeth and drummer Dave Atkins. Stockdale calls 'Cosmic Egg' an "evolution."

The title of the album, he explained, comes from a position in a yoga class he was attending. He found a deeper meaning in the yoga instructor's description.

"I went to a yoga class and one of the instructors in the yoga class said, 'This is your cosmic egg,'" Stockdale recalled. "When you are in this position, think of what is in your head. And I went to the studio later on that day. I was like, I had just written a new song and they said what do you want to call this song. I said 'Cosmic Egg.' I told a few people at management and the label that I had this idea to call the record 'Cosmic Egg.' People really liked it. We kept the title."

'Cosmic Egg' was produced by Alan Moulder, who has worked with Depeche Mode, the Jesus and Mary Chain and Nine Inch Nails, among others. Stockdale described Moulder as having a "great temperament" and being a "master at making you sound good." Working with the Brit was an intense learning experience.

"I think I learned that if you have ideas, you should try them and listen back to them," Stockdale said. "Let the good ideas sparkle and the not so good ideas disappear like natural evolution. It's like raking the dirt for the gold. Be patient."