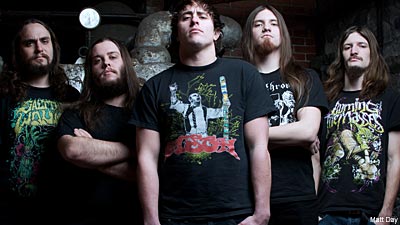 For 'Threnody,' Woe of Tyrants submerged into the works of Ralph Waldo Emerson, where the album title was lifted. "I am not done with college, but had to take time off due to the hectic schedule we've been dealt in this band. So I was reading on my own," vocalist Chris Catanzaro told Noisecreep about his scholarly influence, which isn't spawned from his status as a college student.

"I wouldn't necessarily consider myself to be 'well-read,' or at least, not as much as I'd like to be," Catanzaro admitted. "One day -- I believe it was the last date of our tour with God Dethroned and Abigail Williams in Rochester, N.Y. -- I found myself in a curious state that led me to want to learn more about transcendentalism. I intend on finishing school piece by piece as I get breaks from touring, if that ever happens."

The band's last record, 'Kingdom of Might,' held Christian lyrics, albeit unintentionally. "I've never intended to be preachy as we're not a Christian band, but the themes were obvious enough that anyone with even a small understanding of Christianity or the Bible could determine what the record was about." At this point, Catanzaro was quite involved in his faith. "As many Christians do, I went through changes and found myself falling away. Over time, I had moved back towards my former self and began despising the man I had become. I realized that while 'Kingdom of Might' came from my heart, I had a different story to tell with this next record."

'Threnody' is the story of a traveler commuting between planets, falling from faith in God or in the world/humanity in general and giving up on everything. "The opening track, 'Creatures of the Mire,' describes our 'traveler' waking in a pit comprised of his own waste surrounded by these, well, creatures, all of whom have a different version of the traveler's face, magnified representations of his most negative feelings and attributes -- like sorrow, anger, lust," the singer said.

"This is meant to reflect the start of his fall," Catanzaro continued. "So as the slow fall continues throughout the next few songs, he notices a transformation. Once he gets to the song, 'Threnody,' he is longing for his former self, seeing that he has become the culmination of all of the creatures he had encountered in the mire."

There is even an instrumental track, 'The Venus Orbit,' which is meant to symbolize a chance to go back to where you used to be. "The traveler is floating around Venus -- the Roman goddess of love and beauty -- and considering changing from the temptations of his/her current state," Catanzaro said. "The song is an instrumental so that the lyrics prior to it can be applied as the listener chooses; kind of a chance for the listener to make their own decision or apply it specifically to their own situation. It's much more abstract than 'Kingdom of Might,' but that's always been my preferred writing style anyways."