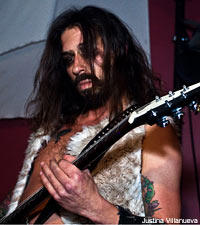 "Put your f---ing shirt on," a person from the crowd screamed at shirtless members of Wizardry during their set. On Dec. 4, while the rest of New York City got wasted on $20 mojitos, people who sought some metal action got $3 drafts, barely dressed dancing girls and a whole lot of loud at The Production Lounge when Empyreon, Flaming Tusk and Wizardry unleashed their own form of musical mayhem.

When stoner rockers Wizardry took the stage, several things were missing from their usual setup: forest-like props, a fake fire and a fourth member. Instead, their madman drummer worked double time providing some powerful throat support as he beat his kit up. And I must say, he was impressive on both. So impressive that I was a little saddened when I found out that the band's status as a trio is only a temporary one.

"As for now, we're a three-piece, though we're searching for a new singer. We'll definitely be playing shows and powering on as such until we find that special someone," guitarist Matt told Noisecreep via e-mail.

Bassist Frank never stops playing, so when his bandmates thanked the other bands there was still background music. Prior to each song, the bassline was ready to go before the rest of the band.

Brooklyn's Wizardry make some super muscular highway metal. Be sure to check out their self-titled effort, which is currently available.

Download Wizardry Songs
Filed Under: Empyreon, Flaming Tusk, FlamingTusk, Wizardry
Categories: News
Comments
Leave A Comment
Hallux Members Met Each Other Through Other Music Projects
Periphery Are the ‘Future of Metal’
Meek Is Murder Kill It for the First Time at the Charleston
Static-X Announce ‘Project: Regeneration Vol. 2′ Album ft. Final Wayne Static Recordings, Debut Nine Inch Nails ‘Terrible Lie’ Cover
Limp Bizkit Are Deepfake World Leaders in ‘Out of Style’ Music Video
10 Rock + Metal Tours From 2003 We Wish We Could See Now
Megadeth’s ‘The Sick, The Dying … And the Dead’ Cover Artist Sues the Band + Their Label
Did Rihanna Use Part of Orgy’s ‘Blue Monday’ Cover in One of Her Songs?
Shinedown’s Brent Smith Discusses Philip Anselmo Controversy – We Should Allow People to Grow From Their Mistakes