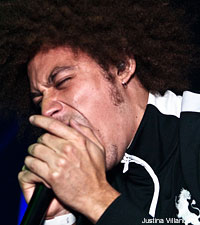 In an attempt to keep the audience entertained while the rest of the Periphery set up guitarist Alex Bols asked, "So which do you guys like better: aliens or babies?"

"Babies taste better!" a fan shouted in response along with other people's random nonsensical replies.

With three guitarists, lots of clean soulful singing and a tech-metal sound a la Sikth or the Faceless, Periphery are really going for it. Like, the six young dudes in Periphery are going to be huge rock stars. With a band like Between the Buried and Me debuting a record at 36 in the Billboard Top 40, it's evident that metal is popular right now. And Periphery just has 'that' sound. You know, the kind that is going to put them on many glossy pages.

When Periphery played at Santos Party House in Chinatown with Empyreon and the Binary Code, the band swept everyone away. I suspected that would happen after seeing them open for the Thrash and Burn tour a couple months ago -- they were the second band on a package of 9 bands but could have closed the show because they were so professional.

A New York native, Barretto was scooped up to join the band following the internet explosion of Periphery's very mathy demo. During the show, he wore his New York pride on his shirt. Literally. Big block letters with "New York F---ing City" covered his black T-shirt.

You can catch the recent Sumerian signees on the road soon. Until then, North Carolinians can see them play with Between the Buried and Me and Veil of Maya.