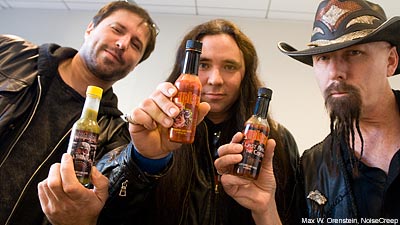 Nestled in a kitchen-like enclave in the musty recesses of the Noisecreep compound, the members of '80s thrash band Whiplash are presenting staffers with samples of their new line of hot sauces for an official taste test.

Three flavors are positioned next to a large cup of nachos. And as the testers dip the chips into one sauce and nibble, then another, it becomes clear that the thermal intensity of all the Whiplash sauces is enough to melt an igloo. In other words, when Whiplash say "hot," they're not messing around.

The Swallow the Slaughter jalapeno-based flavor renders one of our tasters red-faced and teary-eyed, and even the mildest flavor, the habañero-based Power and Pain, packs a wallop that leaves some of us gasping.

"The company that we're working with is From Mild to Wild," drummer Joe Cangelosi tells Noisecreep. "But lemme tell you, the owner originally sent us the mildest one to test it out, and that stuff was brutal. We were like, 'Alright, we're in.'" 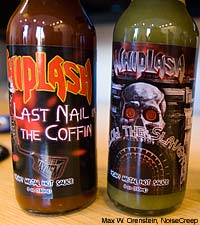 Whiplash's manager came up with the idea of marketing a line of band hot sauces after he found out about the Canada-based company, From Mild to Wild, which creates customized sauce lines for restaurants, corporations and fundraising organizations. "We contacted them about doing a thrash metal line for Whiplash, and the guy was thrilled about it," frontman Tony Portaro says. "The head of the company over there, Brian [Joudrey], is definitely into metal and he just ran with it. We gave him artwork that we liked, and he sent stuff back and forth to us. We made some changes here or there until everyone approved it."

The three types of Whiplash sauce all make references to their catalog. The mild flavor, Power and Pain, was titled after their 1985 full-length debut; the moderate habañero blend, Last Nail in the Coffin, is named after a track from 1987's 'Ticket to Mayhem' album; and the volcanic Swallow the Slaughter, is the lead track of the band's new record, 'Unborn Again.' If Whiplash decide to release more varieties of hot sauce, there are still plenty of good titles, like the 1990 album 'Insult to Injury' or the 1987 song "Drowning in Torment."

"It's kind of funny," says Portaro. "There are a lot of things in our music that work really well as hot sauce names. Maybe we should have done this years ago."

Adam Horne contributed to this report.