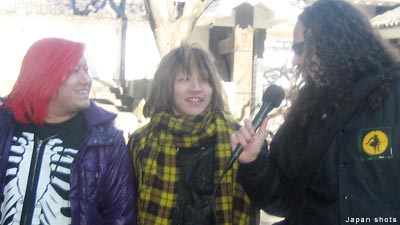 Last weekend, this scribe jetted off to Japan to catch the final two dates on Dir En Grey's 'Uroboros' tour, which nearly razed Tokyo's infamous Budokan arena over two nights. But when the shows weren't going down, I had a nice opportunity to see the city. I wandered into the Shibuya district, Tokyo's equivalent of New York's East Village, and into various punk and rock shops. During the concerts, I observed the behaviors of the fans, and while there were some truly stark differences, there were more similarities than I'd expected.

In Japan, it's obvious Dir En Grey are that country's version of Linkin Park, only heavier. The fans are fanatics for the band's merch. And they didn't care that they were breaking the cardinal concert sin any American metalhead worth his salt would tell you is grounds for banishment from the entire scene: They rock that Dir En Grey merch at Dir En Grey shows. So fanatical were these fans that they lined up outside the venue several hours before, just so they'd have a crack at the merch, which a band rep says was completely sold out. 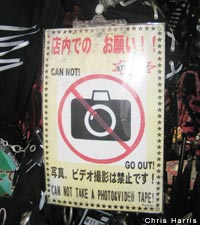 What was perhaps the most incredible difference between American and Japanese concert-goers was the silence. It preceded and followed each and every song Dir En Grey played. They'd finish playing 'Bugaboo,' and there would be dead silence for a second or two, after which the crowd would erupt with applause and growls. The sounds continued for maybe 30 to 45 seconds, and then -- as if on cue -- they'd end. Silence. The 'you could've have heard a fart' kind of silence, which cued the band to jump into 'Reiketsunariseba.'

Outside the realm of the venue, metal was well-represented. Everything from power metal to progressive hardcore, black metal to mathcore was readily available in record stores, street markets and clothing stores. It's not every day you just see a HammerFall shirt for sale in a store, and I was this close to buying this 'Justice For All'-era Metallica shirt, but alas, the yen was limited.

In one store near Harajuku Station, a punk dive where Clash, Guns N' Roses and Sex Pistols T-shirts cost the equivalent of $50, the ceiling and walls were completely covered with autographs and Polaroids of various band dudes. Megadeth's Dave Mustaine was even in one of the shots. Later I spotted a dude wearing a Whiplash shirt. A Whiplash shirt!

While some things are obviously lost in translation, this writer discovered over a very long period of two days that there's not a world of difference between metal in Japan and America. The genre may be thriving here, it's also going strong in Tokyo, a city you've got to see to freakin' believe.