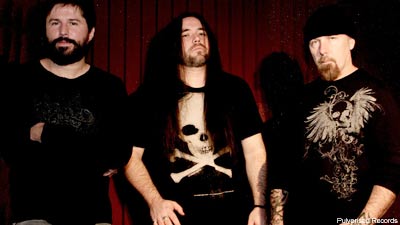 In the mid '80s, New Jersey trio Whiplash were one of the East Coast hopefuls in the frenzied thrash metal sweepstakes. Their first album, 'Power and Pain,' hit in 1985, the same year Anthrax released 'Spreading the Disease' and Slayer dropped 'Hell Awaits.' Over the next 13 years, Whiplash released five more albums and played shows with Slayer, Possessed, Overkill and others, but they never broke beyond the status of local legends. In 1998, following multiple lineup changes and numerous labels, the band broke up.

"When you're growing up and writing and having a great time and recording and living the life with all the glory and everything, you don't care if you signed a bad contract and you're not getting paid," frontman Tony Portaro tells Noisecreep. "But eventually, you turn around and see all this money coming in going to the record label, and it turns from fun into a business where you're not making any money at all. And that just takes all the wind out of your sail. You feel like you're getting screwed, and it kills all your motivation."

A few years after they broke up, Portaro started missing the buzz of the guitars and the roar of thrash crowds. So, in 2002 he contacted bassist Tony Bono and drummer Joe Cangelosi to see if they wanted to give it another go, profits be damned. The musicians were game, but then tragedy struck. Days before Whiplash were scheduled to start rehearsals, Bono suffered a fatal heart attack.

"Nobody really knows what happened," Cangelosi says. "The circumstances surrounding his death are really a mystery, but they ruled it a heart attack. I really miss the guy."

"He was a great person and a great player and we miss him dearly," Portaro adds. "It's a shame he's not here with us. He would have been killing right now."

Without Bono around, Portaro and Cangelosi lost their appetite for Whiplash for a while. Portaro opened a studio to record other bands, and Cangelosi started to work for the Brooklyn school system. Then, after a suitable grieving period, Portaro called up Cangelosi to kick-start the Whiplash machine back into action. They jammed out a bunch of new tunes, then hired their friend Ritchie Day as their new bassist. Day had jammed with Cangelosi when they were 13, and he worked security for Whiplash in the late '80s.

"He's always been behind the scenes helping us out and partying with us," Cangelosi says. "So it was really no big deal that he joined the band. Once we got together and played, it was clear that as a trio we sounded so good it was so natural."

Before they entered the studio, Whiplash scheduled shows with numerous European thrash festival promoters who were anxious to hear of the band's return. They played 20 shows in 30 days. Then when the got back home, they taught Day the new songs and started recording at Portaro's studio.

"It was one of the easiest and funnest times we've ever had in the studio together," Cangelosi says. "We just said, 'Look, let's not think about what other people are doing in music today. Let's just go in there and whatever ideas we have let's put them down and see what we come up with.'"

"We felt so comfortable this time around," adds Portaro. "We would just come up with a riff, and the rest of the song would almost write itself. It was almost like there was another being involved helping us out and guiding us."

After a short pause, Cangelosi concludes, "To tell you the truth, I think that was Tony Bono."