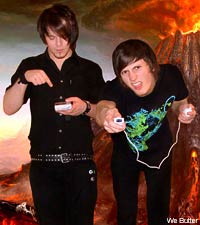 Chances are you've never heard of We Butter the Bread With Butter. But soon enough, you will. The band is comprised of two German dudes who have a rather bizarre sound ... so bizarre, it's bound to catch on with fans of bands like Attack Attack!, Dr. Acula and even the Black Dahlia Murder.

The band has been described as both deathcore, grindcore and electrocore, but what WBTBWB sound like is a cross between Job for a Cowboy and Eazy-E, if you can imagine that -- or maybe a tougher-sounding Horse the Band. How does the band, which consists of Marcel Neumann and Tobias Schultka, describe its own sound?

"It's like a very, very hard and chaotic children's birthday," they tell Noisecreep. "[Listening] to us makes just fun. There are a lot of things you can dance to, a lot of things you will bang your head [to] while driving your car, but also some emotional and technical things. We're really proud that there's no band we can be compared to. We've got a lot of elements other bands have, but in a mix that was never there before."

Much like the band's message -- "we don't have one ... maybe forget about being serious and have fun" -- what first inspired WBTBWB's music was rather capricious: nursery rhymes from their native land. The band's songs are essentially covers of these songs, set to blast beats, sludgy riffs, pig-squealed vocals, and electronic elements. It certainly doesn't sound like something two guys could pull off live, but the band claims they do.

"[When people see us live, they're] like, 'What the f---? Are there just two guys playing next? They never can do it.' But after a few seconds, the party is on fire," the band explains. "It's just a time of having fun, dancing around, making some walls of death and start dancing again. [People] thank us for our music, because it's a way for them to forget their daily, boring thing. And at our concerts, so many people are going totally crazy."

When asked about their influences, WBTBWB cite Bring Me the Horizon, Black Dahlia, Justice and Crystal Castles, but "Lady Gaga and Katy Perry [are] great to hear for us, too." They'd like to make it to the States to tour, and say it's only a matter of time before they're hitting the U.S. shores. And yes, they're well aware that what they do is not going to be everyone's cup of tea ... especially if you're a tea-drinking metal elitist.

"There are some people who hate us for what we do," the band tells us, "because they cannot understand that it is maybe allowed to create something new."

And when it comes to ideas that are new, WBTBWB seems to be full of them. "In the future, we want to have a 100-member band, with each instrument the world has ever seen," they say. "But actually, maybe we don't."